It does feel like spring is definitely on the horizon though and the days are certainly much longer.  The birds definitely feel the season is upon us – we have been gathering chicken, duck and goose eggs and indulging in plenty of baking and egg eating – scrambled eggs are back on the menu and today I happily turned the signs round on the egg fridge (for storage and display rather than chilling you understand, it is not plugged in!) and put the first eggs of the season out for sale. 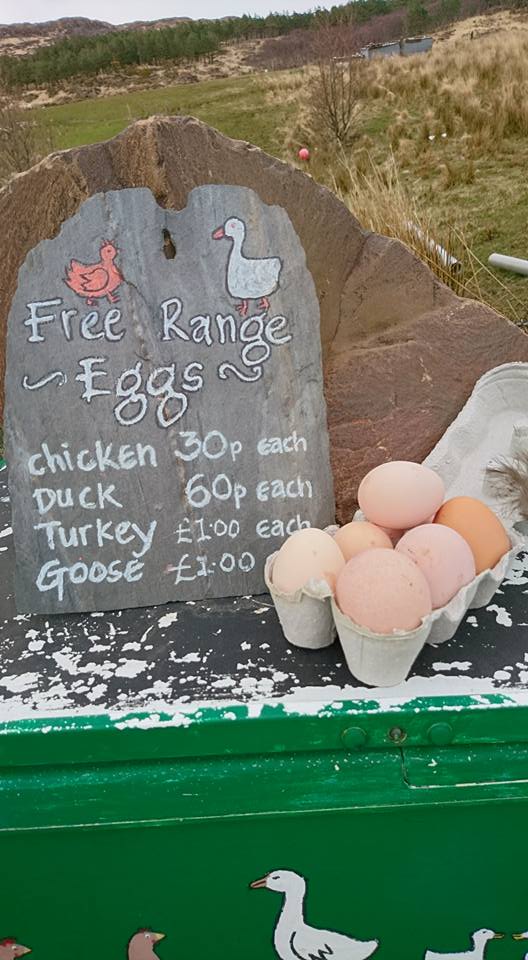 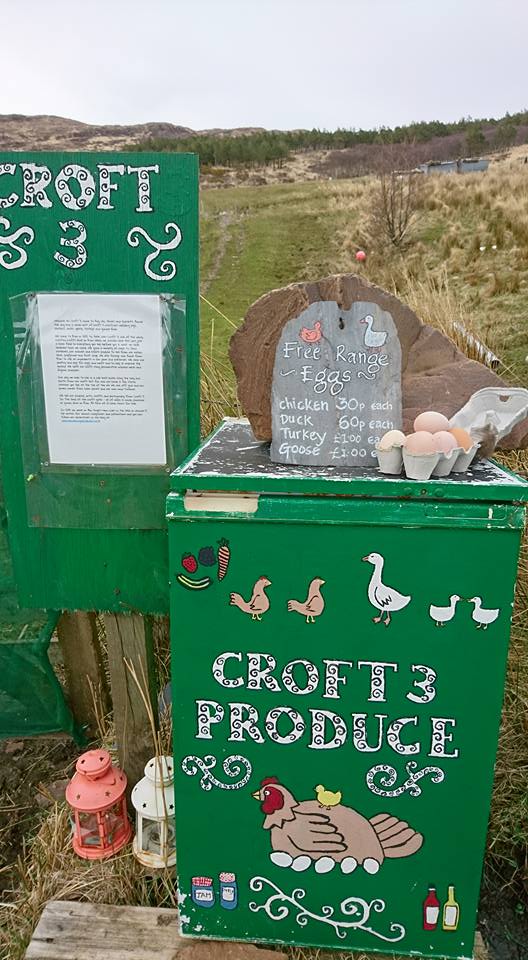 We’ve already had some good sales from the shed and sent jams and crochet midges over to the mainland for sale in the shop and craft fayre in Mallaig. I’m already about a third of the way to raising the funds for the spinning wheel and we’ve sold the first clock.

I’ve added some Highland cows and a red deer to the cuddly creatures too. 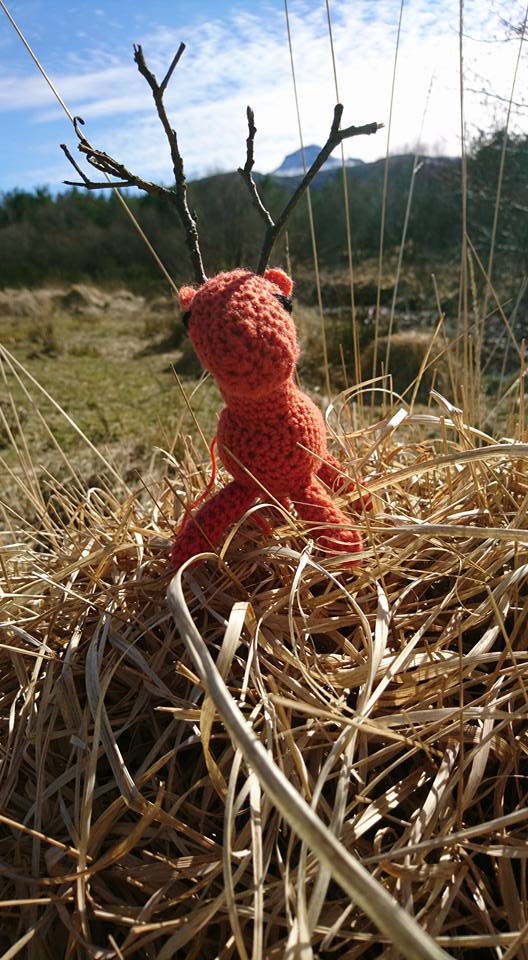 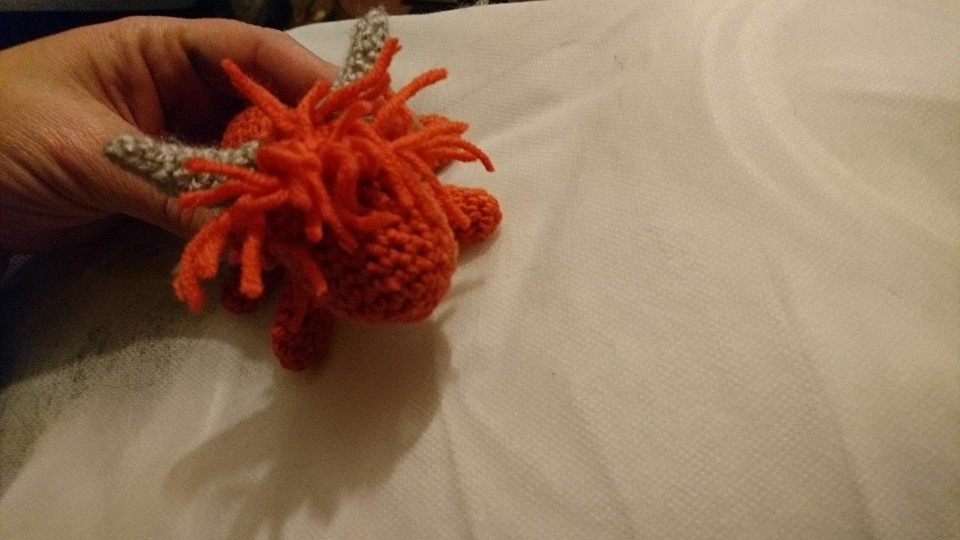 The plan to use the chickens to clear the walled garden area of raised beds is going splendidly. Our next big plan for that area is to create some decent paths between the raised beds. The whole area gets very muddy each winter and barely recovers during the short summer months each year despite a drainage ditch along two sides taking excess water away. The idea solution would be something like gravel, wood chippings or a similar material laid down in bulk between the beds but that would be a mammoth task to get to the right place so we are pondering solutions perhaps using pallets which we have plenty of to create boardwalk style paths around the beds.

In the meantime I have been sowing a smaller number of seeds than in previous years as I am sticking to what I can grow either in containers or in perhaps one or two cordoned off beds – mostly herbs, salad, tomatoes, peppers and peas. And some flowers. 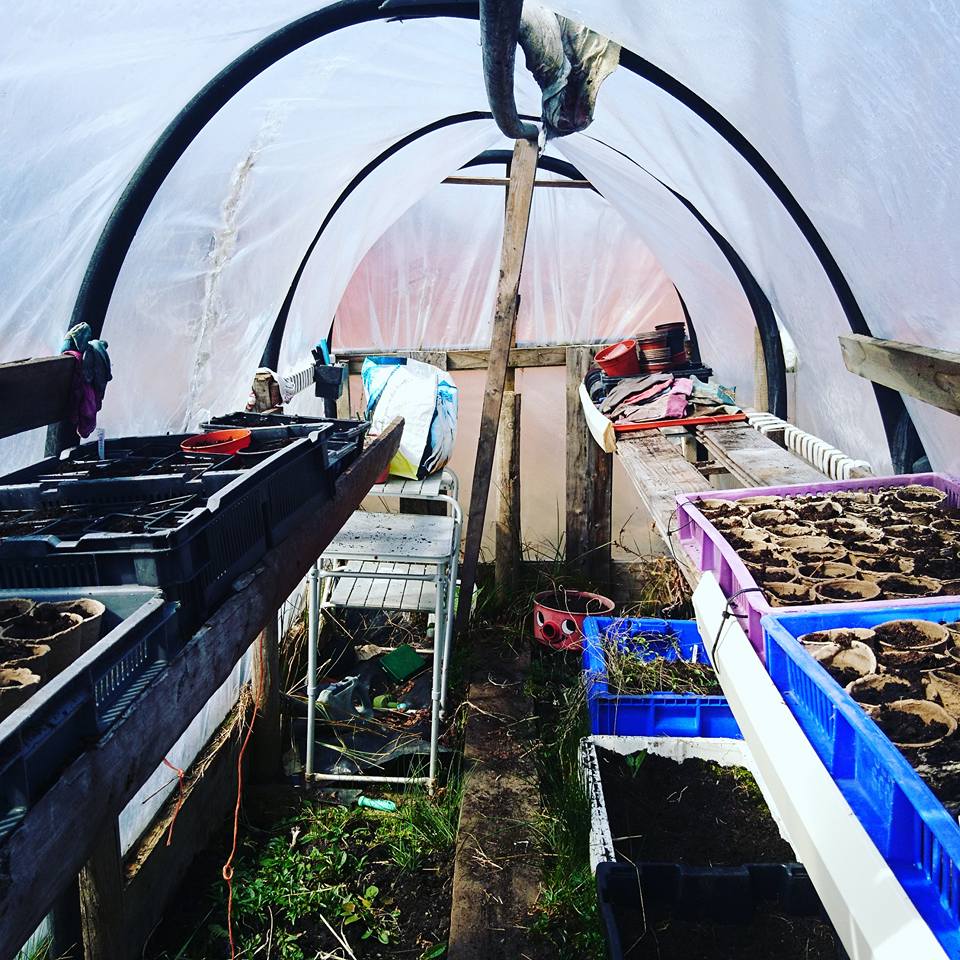 Our biggest planned and hoped for crops this year though will be strawberries. We all love strawberries and when we lived in Sussex going strawberry picking at the local PYO farm was a weekly treat throughout the summer. We would spent a whole afternoon there and come home laden with freshly picked fruit and veggies and sometimes maybe slightly strawberry juice stained lips! It was often a struggle to pick enough to guarantee we would have leftover fruit to make into jam even with a whole field to pick from but it’s worth trying restraint because home made strawberry jam on home baked bread in the middle of winter is such a treat of remembering that summer will be back once more.

Strawberries are one of the crops which actually thrive here on our rather rubbish land. Soft fruits generally do well in Scotland and on Rum with wild crops of brambles, raspberries and blueberries on the island. The acidic and nutrient poor soil doesn’t seem to bother them and the wet climate and long daylight hours seem to happen at just the right times in their flower to fruit cycle to give us excellent crops with little effort. Indeed foraging for wild brambles and raspberries has long been a summer activity for us here, but the cultivated crops of red and blackcurrants and hybrids such as tayberry and loganberry do well for us too. And our strawberries here are the only crop I have ever done better with on Rum than I ever did in Sussex. I think my entire patch, which has grown year on year is still going strong from an original 20 or 30 small rooted plants I bought in our first year with the community polytunnel and then dug up after it blew down. We transplanted them into the purpose built mini extension to our little polytunnel where they continue to do fantastically well fruiting heavily right through from June to September and sending out plenty of runners which I harvest to plant elsewhere. Last year we extended to two more large raised beds, and at the end of the season I took runners from them and we built a caged area with black plastic sheeting covering the grass and planted the little runners through small crosses cut into the ground.

When we got back there was not really much sign of those runners, and what was there was winter beaten and withered. But Ady and I covered the area with some plastic (given to us by the man who came to take furniture from the castle to be deep freeze treated for moths and bugs. The furniture was wrapped in large sheets of plastic for transportation and protection while in the freezers and was destined for the skip after use when it came back here but Ady asked if we could have it and the guy was only too happy not to have to find somewhere to dump it) about 3 weeks ago and weighed it down . Today I cleared out the dead leaves and removed runners from the original patch and took them to the new area to plant and was amazed when I pulled back the plastic to see the growth of the plants underneath. 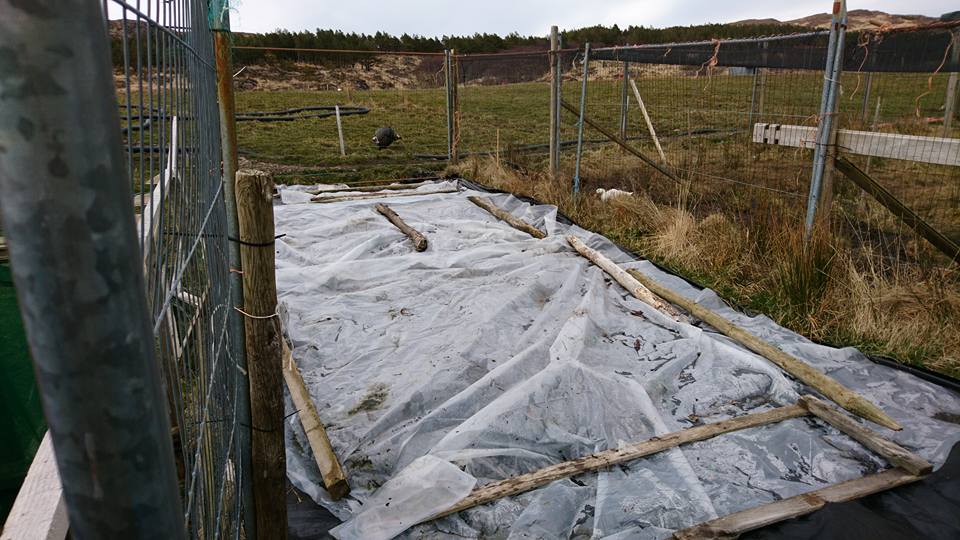 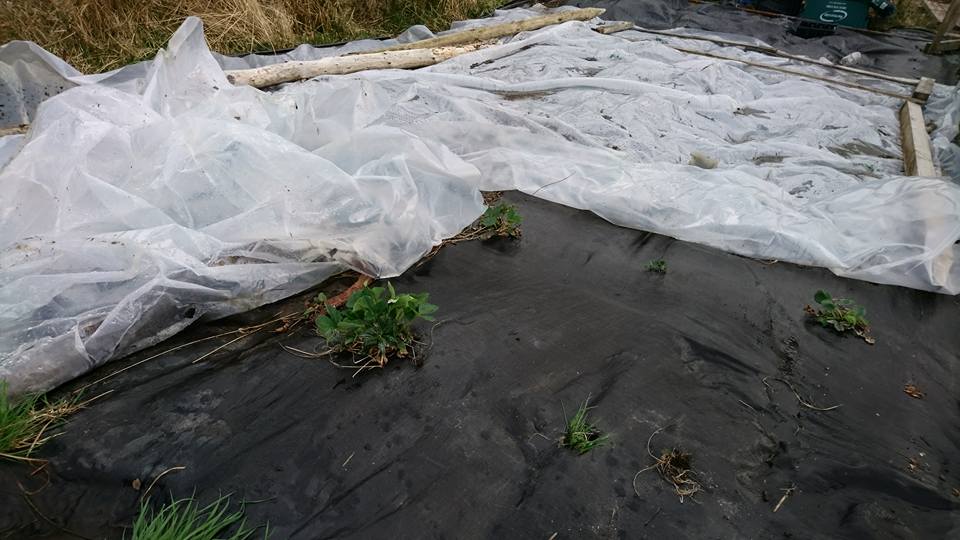 We need some paths in between plants in there too and a better method of covering the area with plastic but have a plan involving dismantled pallets for in there too. Which is next week’s job list.

It’s not all craftin’ and plantin’ though. We’ve been to the village to have tea and cake and meet the new CEO of SNH who was over on a visit, Ady and friends went up the hills on Easter Sunday, our community ranger launched an exhibition of her art and photography in the village hall, we had a friend up for dinner and a trip across the island to Harris bay for a spot of beach combing. 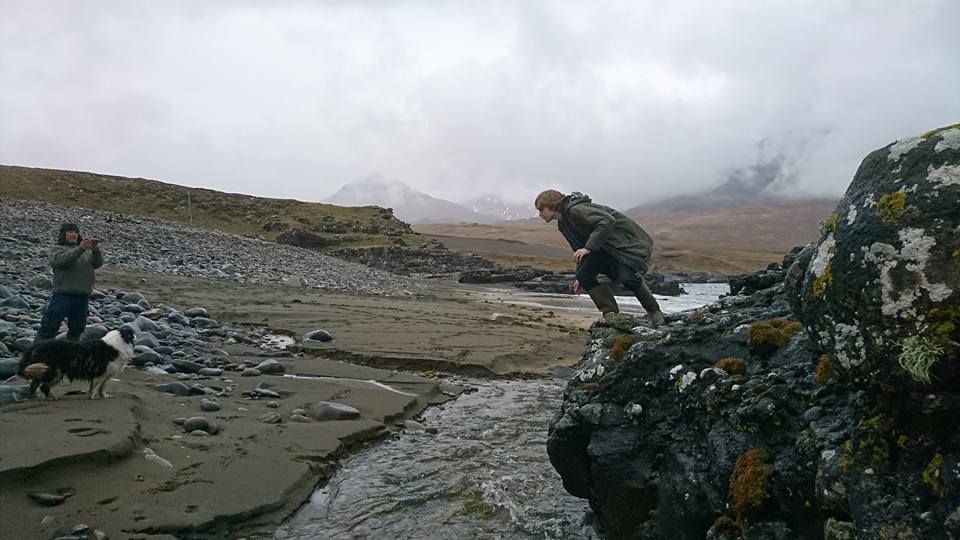 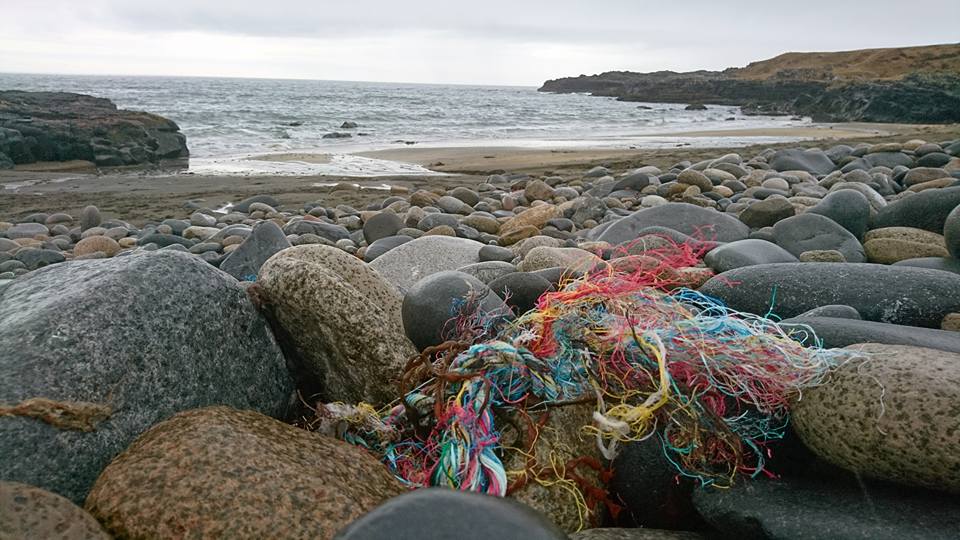 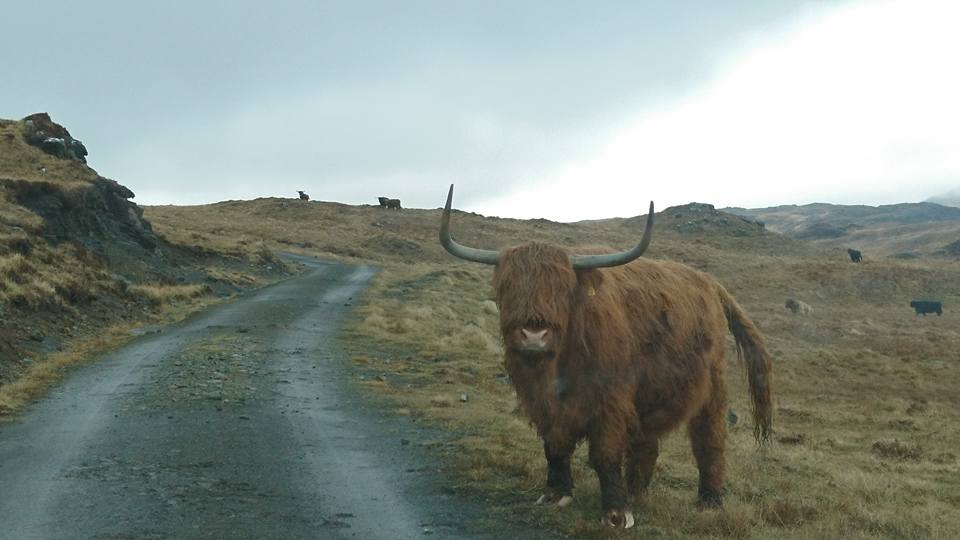 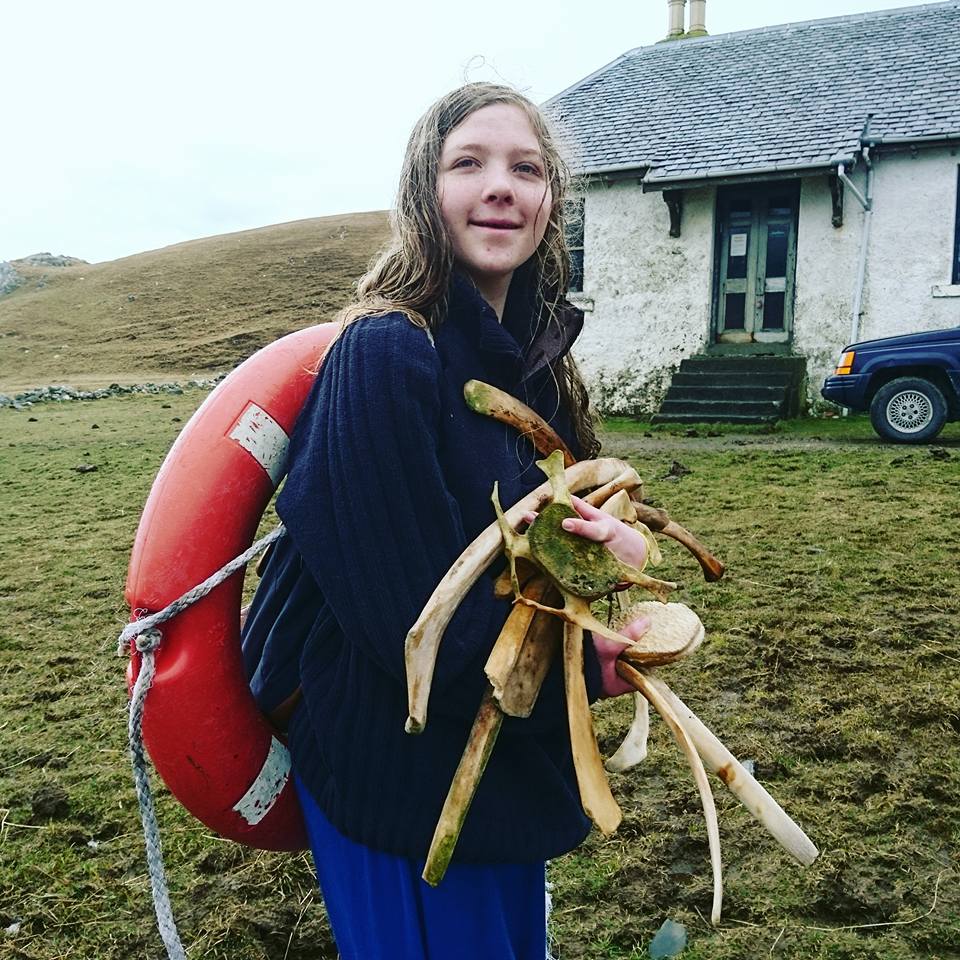 Scarlett’s haul of ‘ treasure’ included some bones from the minke whale we found over there this time last year and a life buoy from a boat which thanks to the wonders of the internet we were able to find online and see photos of. 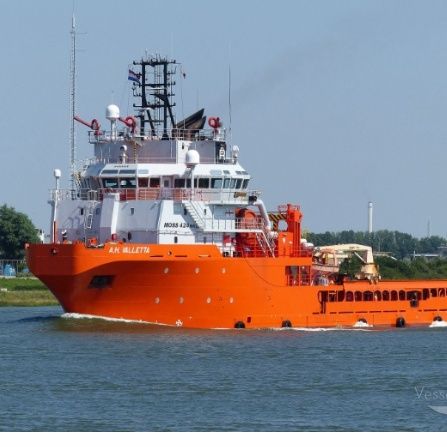 We also checked out the aftermath of the fire last week. You can clearly see the area that the fire had raged across and still smell the charred stench in the air over there. 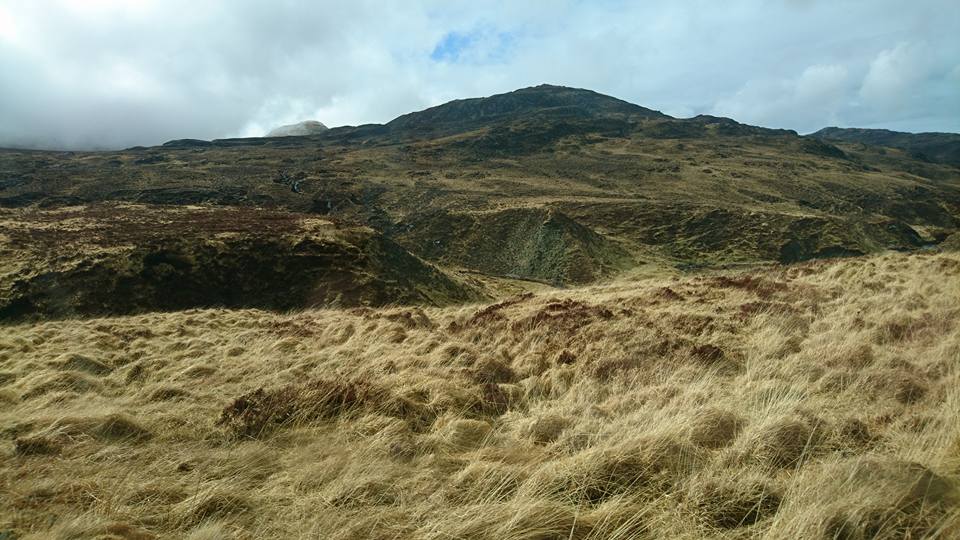 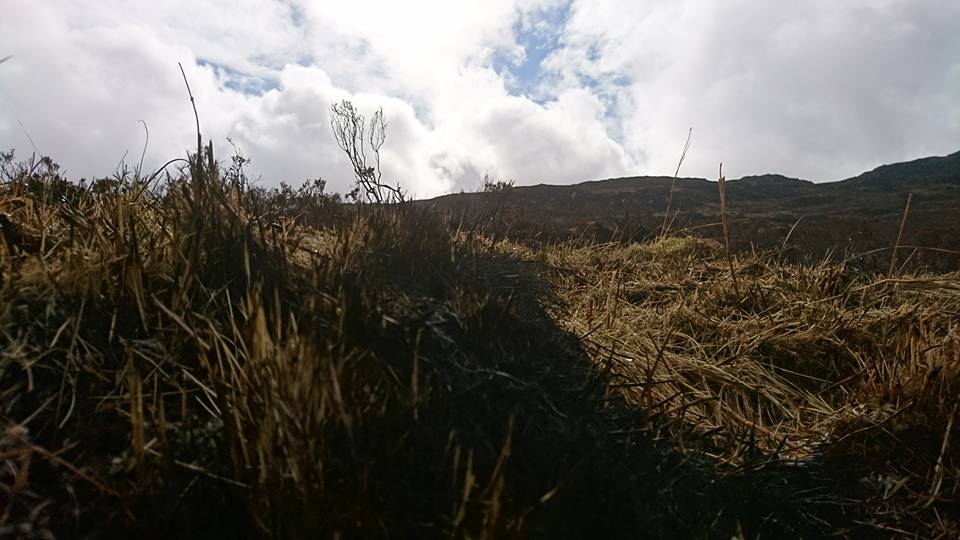 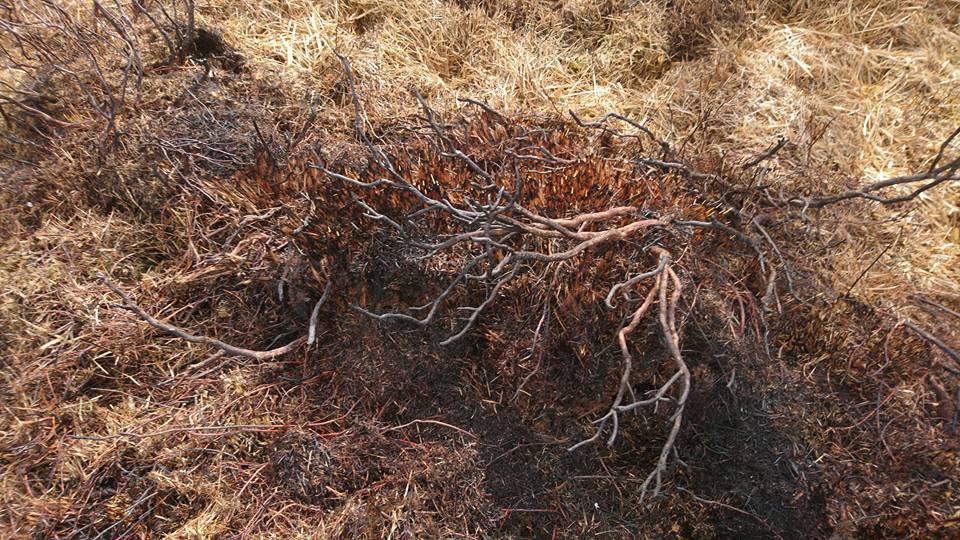 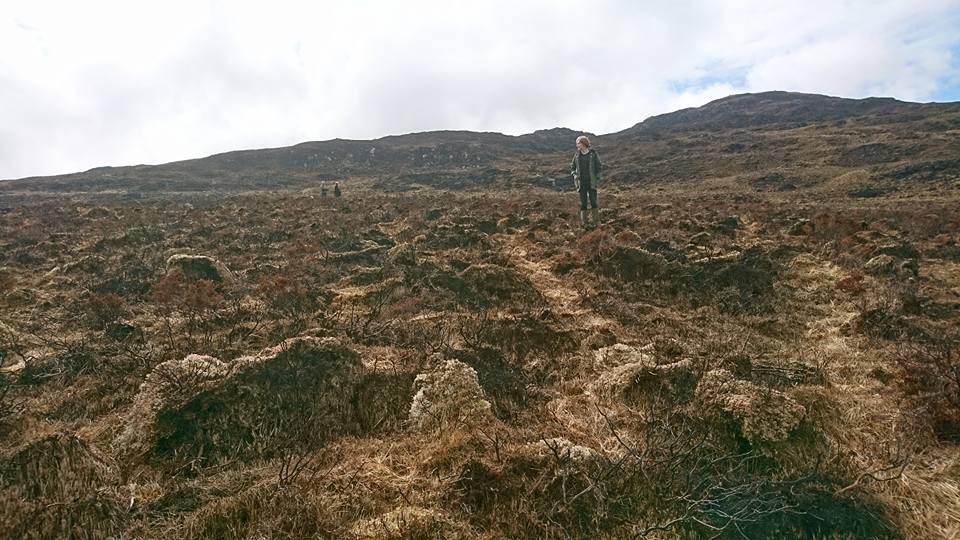 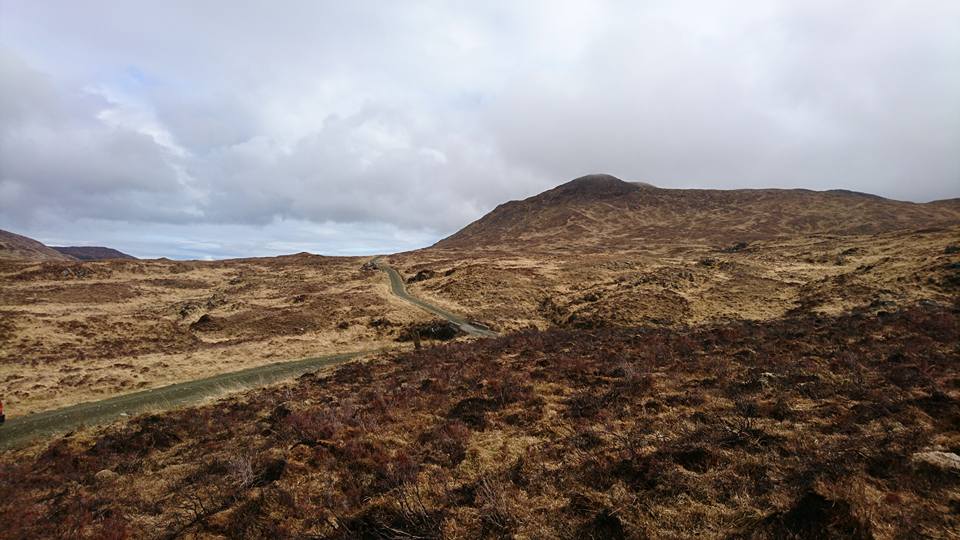 Davies and I have both had our third tutor marked assessments back and are pleased with our results. I got a very high mark (97%) and Davies got some really great feedback with words like ‘excellent’ and ‘very good’ littered throughout it including high praise for the standard of his spelling, grammar and written work which was lovely to hear. We have now actually finished the material of the course and are taking a week off before doing the final assessment essay which will conclude our access courses. We are both well on track for good passes and Davies has already transferred his study to a BSc in Psychology with the credits for this course going towards that. He will have the summer off studying having done both the access course and an online course in academic writing and essays alongside it and then carry on in the autumn. I am still undecided as to whether to carry on or not but I have largely enjoyed it so suspect I might.

It’s lovely to be back and enjoying our usual eclectic mix of no two days being quite the same and a blend of enjoying the now and looking forward to what is to come.