Today has been one of our really productive days. We achieved everything we set out to do – and more. Another few steps closer to feeling like we have really arrived on the croft and are living it, doing it, making it happen.

Our goose and gander were due to arrive on the late boat this evening – this completes our current plans for livestock. We do have goats pencilled in for year two, turkeys on our wishlist and would like to get a drake to move in with our ducks. We have a broody hen sitting on eggs so could be celebrating our first croft birth in the next couple of weeks and our pigs are looking like they may be gearing up to learning what to do to provide us with piglets at some future point but for now we are not looking to increase the mouths to feed here for a while.

We were given an old chicken house shortly after we moved here, donated from someone no longer living on Rum. Ady and I got it to the croft with a combination of manhandling, sheer determination and plenty of heaving it about swearing and it’s been stood ready for geese. This week Ady penned off another strip of land next to the ducks for the goslings to call home until they are settled here. Geese are perfect smallholders .livestock as they don’t actually need any looking after really. They graze so don’t need feeding and are pretty self sufficient. They pair for life so one goose and one gander is perfect as our breeding mama and papa and having got them still small and downy (ish) we hope to have them semi tame rather than scary, hissing and terrorising!

This morning we finished off the goose area, cleaning out the house and making good the floor which Barbara the pig had managed to fall through on one of her various jaunts out of the pig pen before we persuaded her to stay in there. 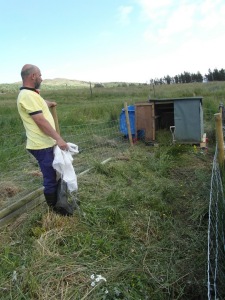 We then decided to tackle the duck house issue. We had been housing them in a wheelie bin and it was more or less working but looked a bit odd and five of them were really too big for it. We have accrued a collection of galvanised iron corrugated sheets so decided to construct a new duck house from some of them. Sledgehammers, nails and fence posts later we were proud constructors of a new duck palace. The ducks love it (we know, we chased them in to ensure they realised what it was and they stayed in there for ages and ages!) 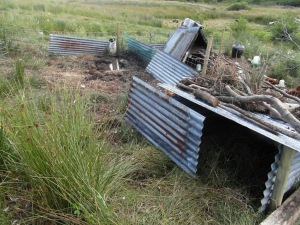 We also banged on some more panels to the chicken house to make that more weather proof. It does all look very erm rustic but I love how it has all been donated / found / stuff we brought with us from home rather than perfect and overpriced animal houses.

Meanwhile Dragon and Star (I stress again for someone I know is reading and has made contact but should really have done their homework far better – they know who they are! that Dragon and Star are not *really* their names!) were spending some quality time with Tom and Barbara (their actual names) Pig. They are very affectionate and friendly pigs who love nothing better than lots of attention, strokes behind the ears and rubbing of their backs and bellies. 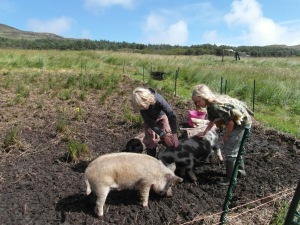 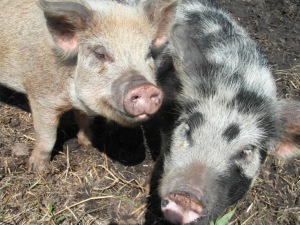 We collected some cut reeds and grass which had been left drying out to use as bedding and put fresh bedding in all the birds housing before calling it lunch time.

A feast of a lunch later we gathered tubs and walked down to the village to do some raspberry picking. There are loads of wild raspberries in and around the village, just some of the array of free food to be foraged here on Rum. There is already a resident jam maker here so I won’t be making plain old raspberry jam for sale but will be making some for ourselves and possibly doing some twists on classics (my strawberry and chilli jam, bramble and lavendar and other such combinations were real hits back at home) along with some other stuff such as raspberry puree should we be lucky enough to harvest sufficient for such things. For now, we have enough to make a very lovely eton mes for dessert tomorrow using some of our own eggs to whip up some meringues :). It was a very nice couple of hours collecting them in the sunshine with the kids eating most of their harvest anyway.

On the late boat came Margo and Jerry – our goose and gander. Very cute and still a bit fluffy they are too. 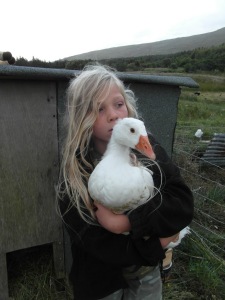 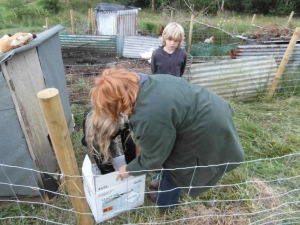 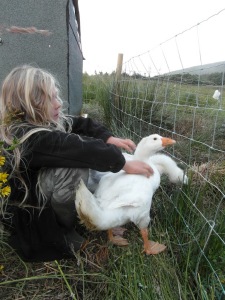 And finally… today we managed to get up signs on 3 of the 4 gates to the croft. I’ll make up the fourth one tomorrow and we’ll get that up too.

Our land, our home 🙂 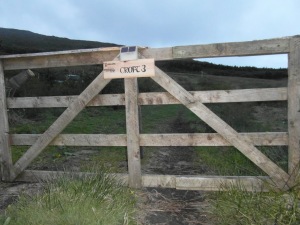 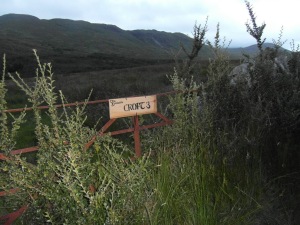 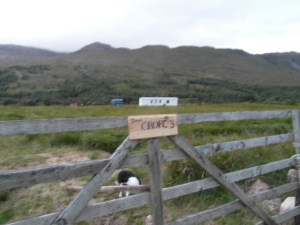 2 thoughts on “Day of days”