This year is planned to be mostly about the cob project.

The livestock will tick over and we hope to have a decent healthy litter of piglets from Tom & Barbara to raise for processing towards the end of the year, the birds will hopefully increase in numbers themselves (we have plans to create brooding pens for any birds who start sitting on nests, to protect them and their young) and we have arranged to take some lambs from our fellow crofters here on Rum. We are hoping to do better at egg collecting this year than last year too, as the utter free ranging nature of all our birds means the crow often get to the eggs before we do.

The Community Polytunnel blew down during the winter storms this year and at the most recent community meeting it was decided that prior to recovering it with polythene it should be moved to a more central, accessible and sheltered location in the village. So we are back to our fruit cage, our walled garden of raised beds and some plans for perhaps a geodesic dome, mini polytunnel or similar constructed from scrap material we already have. We need to keep most of our time and focus for the cob project so won’t be putting massive efforts into growing this year but the spring has nudged at our self sufficient dreams enough to have us still planning to sow some seeds and get our hands dirty in the soil again.

The fruit cage doesn’t need much attention now I have fixed the netting, mended the door and moved some of the containers from the polytunnel into there safely away from our birds and roaming deer. I have planted some containers with seed potatoes and will get some salad and some peas started off in there too. The fruit bushes and trees are mostly all still dormant but there are the start of some buds on a few of them.

The walled garden needs some attention. Firstly there is in-filling to do in the dead wood fence. There has been some damage to part of it during the winds so those areas need fixing back up and then it all needs a fresh load of dead branches put in to give it some height. The beds are looking pretty good and are all ready to start taking things planted in them (after a bit of weeding) but they all need netting fixed over them to stop our birds from eating everything. The first year we made net frames from old tent poles but they blew down. Last year I made arches from willow to support the netting which worked better but the netting is cheap and didn’t last. I think the best option would be custom made frames for each bed with netting fixed to the frames that can be lifted on and off to allow for weeding and harvesting. A big job but one which will only ever need to be done once. We have plenty of scrap wood and probably enough of the netting to fix on to. That task has made it to the 2015 Job List.

Also on the list carried over from last year and now crossed off was making an entrance arch. I had seen some ideas online and in magazines so had a vague notion of what I wanted and even cut down some branches and began nailing them together last year. But the nails didn’t really work and at the time we didn’t have a drill so that job got put off. Now we do have a drill so I cut some more wood and yesterday and today we built the arch, put it in place and added some extra bits. I’m really pleased with it, it looks just how I wanted it to. 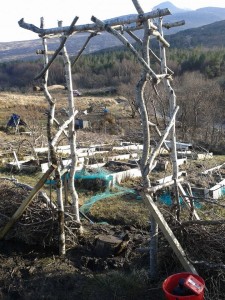 More on the under glass / plastic ideas once we have actually come up with them properly.

And finally I leave you with my definite favourite image of the week – back to the last cup of tea of the day being enjoyed outside on the sporran. Hurrah! 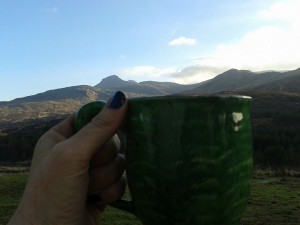