And a more positive ‘where are we at’ type posting if only to push the one below back where it should be, firmly  underneath all the many great things we have been getting up to.

More Shearwater trips – we’ve managed every week so far and this week just gone was the most exciting yet with a glimpse of a minke whale by the skipper and a full on sighting of part of a superpod of dolphins that have been exciting folk in the area. We saw about 10 of them playing around the boat for about 10 minutes. So magical with everyone just smiling and pointing and feeling thrilled at the close encounter. 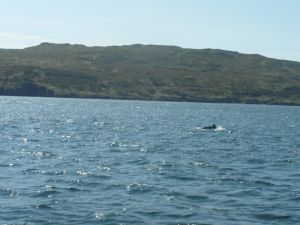 We walked up Hallival! Thanks to Vikki, who celebrated her first year here on Rum last week for taking us along with her. We scaled the very top, added a couple of stones to the stack, almost broke poor Bonnie who required carrying some of the way back down and enjoyed the most magnificent panoramic view of Rum, Skye, Eigg, Canna, Muck and across to the mainland. Quite breath taking – in more ways than one! 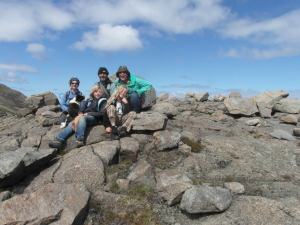 On the croft the hens are all laying and Dave the cockerel is doing his thing. The ducks have not started laying yet but are getting nice and heavy and healthy so I’m sure it won’t be long before they are. We’ve started selling our eggs to the Rum shop so the chickens are starting to earn their keep and I’ve been doing baking for the teashop which is both using up eggs and earning me a bit of money. I am busily crafting to build up a stash of items to sell at the upcomming Rum craft fayre later this month and anything left over will go up for sale in the Rum Craft shop too. We have some plans for a couple of other money making possibilities so are hoping to start breaking even with our spending before too long.

In other news we feel very much at home here with the community and have been attending lots of meetings, events and informal chats over a beer or two. We’ve had various people round for tea, drinks, dinner and rather memorably on Friday night an ‘after hours session’ which Dragon and Star are referring to as ‘the party’ which went on til the early hours and left lots of people looking rather delicate on Saturday morning! This week sees our second community association meeting since we arrived and we are looking forward to getting stuck into some of the exciting projects and ideas that are being talked about for making Rum an even more exciting place to visit or even move to.

2 thoughts on “Crofting for beginners”