Because we try hard not to just be about the talk…. although I confess there is quite a list of things we have ‘carried over’ or simply allowed to slip off the bottom of the list over the years.

The chickens are now all hanging out in the ‘walled garden’, There are three permanent beds (out of, I think 18), two are strawberries and one is asparagus. These have been covered over and protected with a variety of stuff. The other beds are being worked over by the birds. We are throwing their feed on to the beds so they scratch around and get all the weeds out, tread their own manure in and generally do a good job of turning over the soil, eating bugs and snaffling the weeds as they start to grow. We will be able to collect their eggs from that contained space, protect any chicks they hatch this year from the crows and at the end of the season we can mulch all the raised beds with their used bedding and a hefty layer of seaweed. Hopefully next year we will have a really good start of nice, rich, compost to start growing in in there. 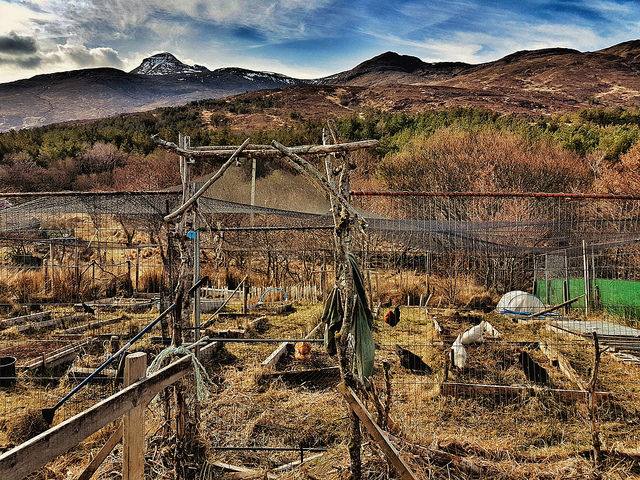 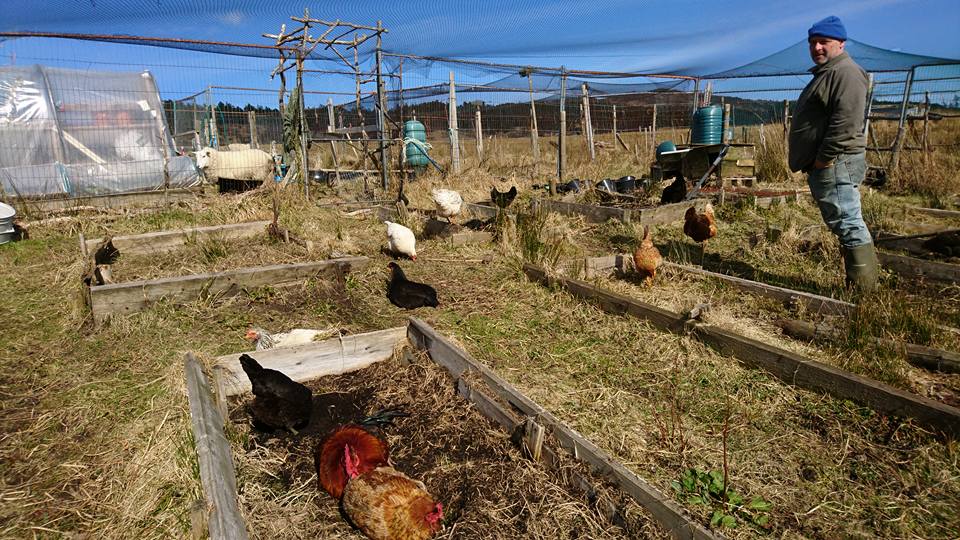 The ducks are carrying on doing a similar job in the adjacent cage, keeping the grass low and hoovering up the bugs, grubs, slugs and other creatures who might be considering making their homes on the fruit bushes and trees in there. Once those bushes start to show signs of life we will move the ducks out. Note the naughty sheep hanging around the gate of the fenced area hoping to get in.

It’s been a week of extreme seasonal swings. Three mornings of frozen pipes meaning no water supplies and very cold nights sleep. This morning there was even ice on the containers of water we’d got in preparation for non-running taps. Cold cold nights mean clear clear skies though and we’ve been treated to amazing star gazing, spotting the first star in the night sky (which is actually Uranus, not a star at all) and several shows of aurora dancing too. Days have been clear blue skies with a pair of white tailed sea eagles performing an almost by the clock lunchtime fly by dancing in the air and performing their majestic mating ritual moves over the croft. 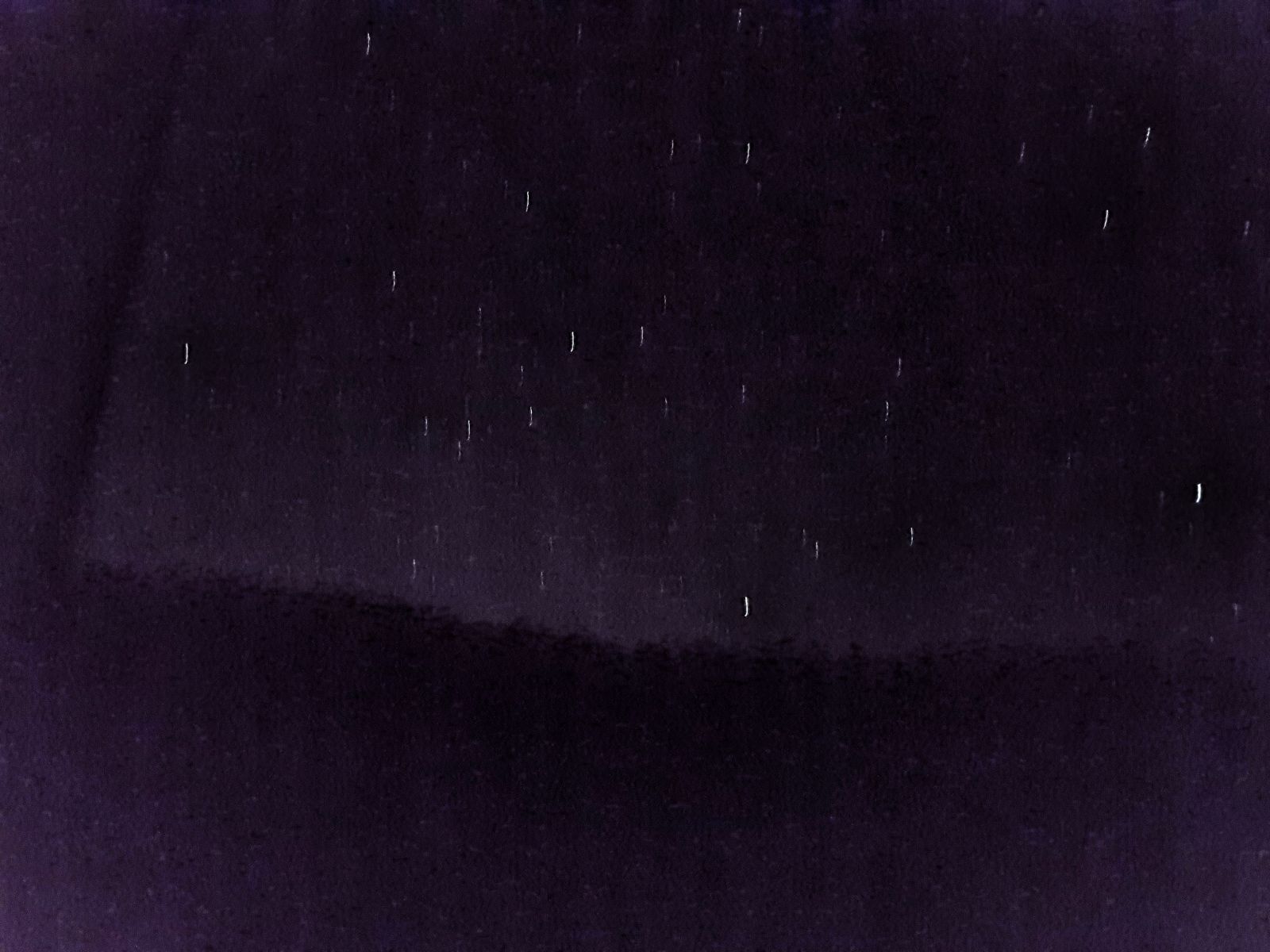 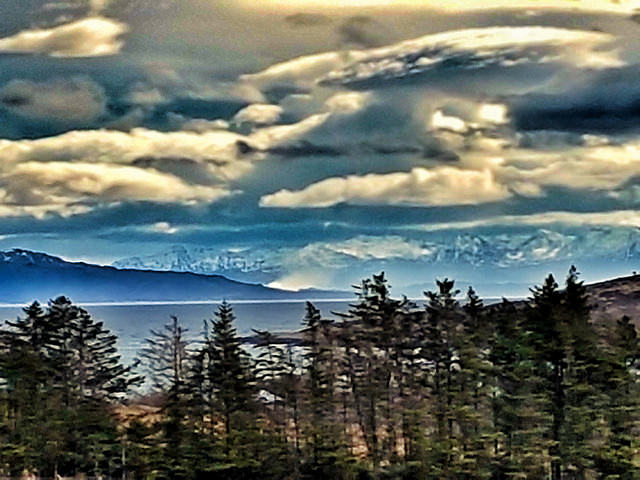 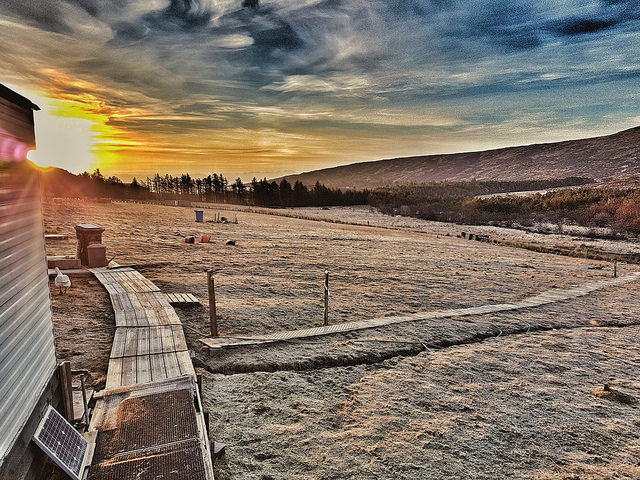 We had a delivery of 400 tree saplings. Although we have them ready to plant it was simply too windy over the weekend to even try and start putting them into the ground – the tree guards would have been blown all over the croft and our toes and fingers would not have lasted more than half an hour outside. I did however brave a couple of hours each day over the last three days to work my way down to the pier and back re-doing the faded wellies on the welly trail. adding a new sign here and there and replacing a few wellies which have been lost over the winter. It’s all looking nice and smart and shiny ready for the start of the tourist season. 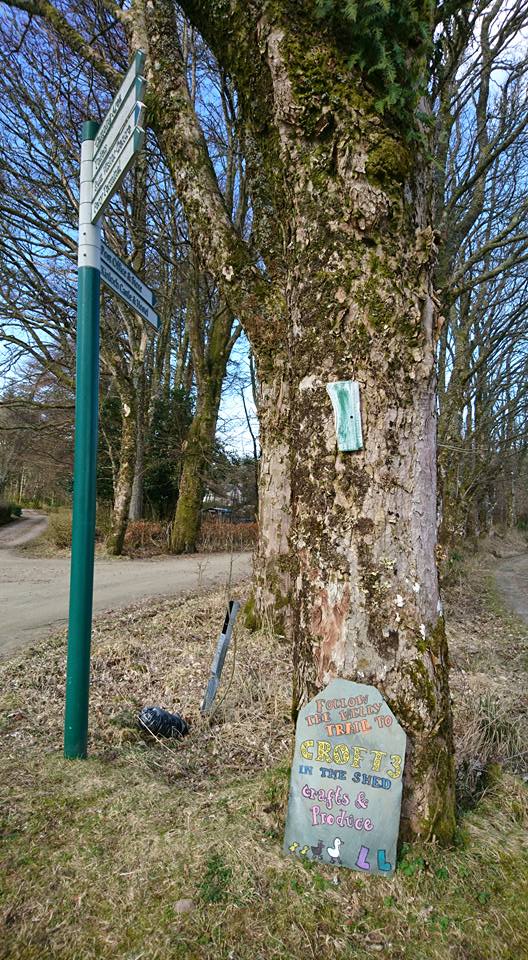 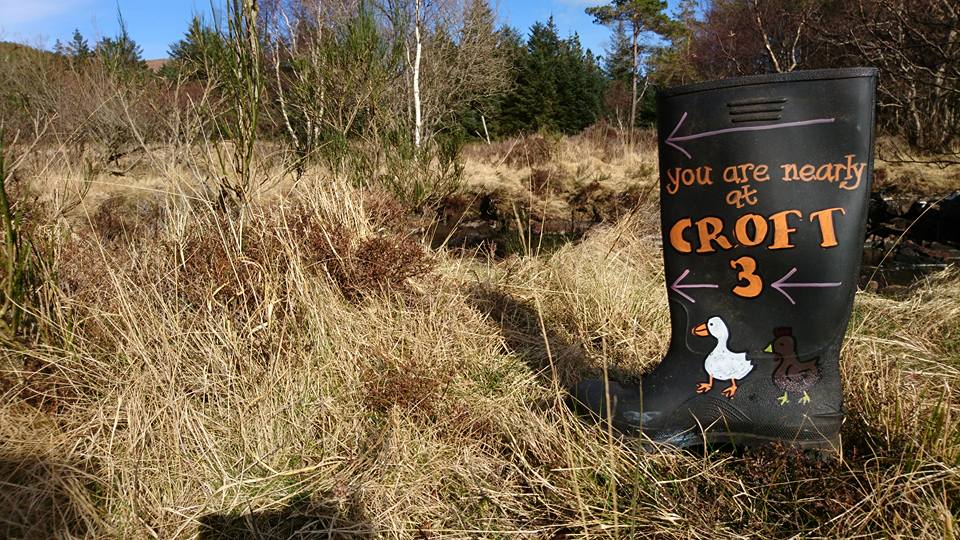 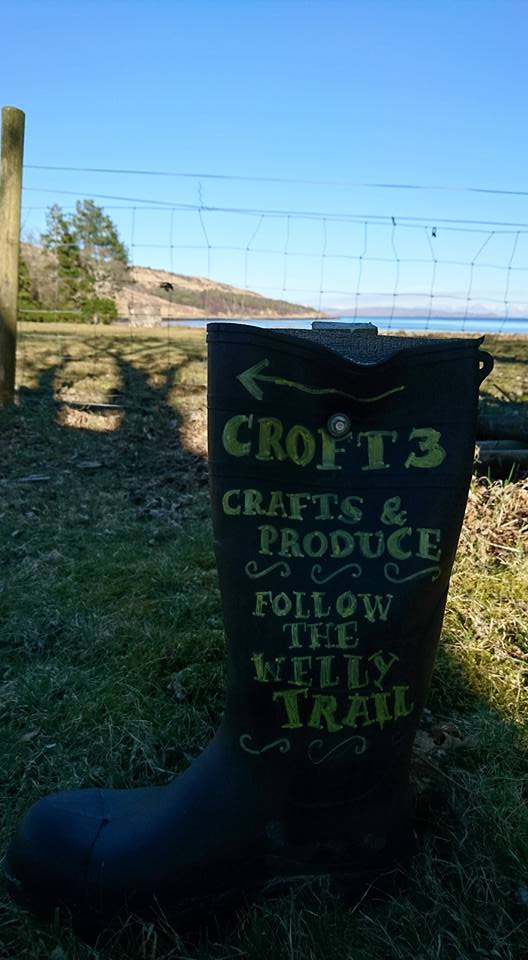 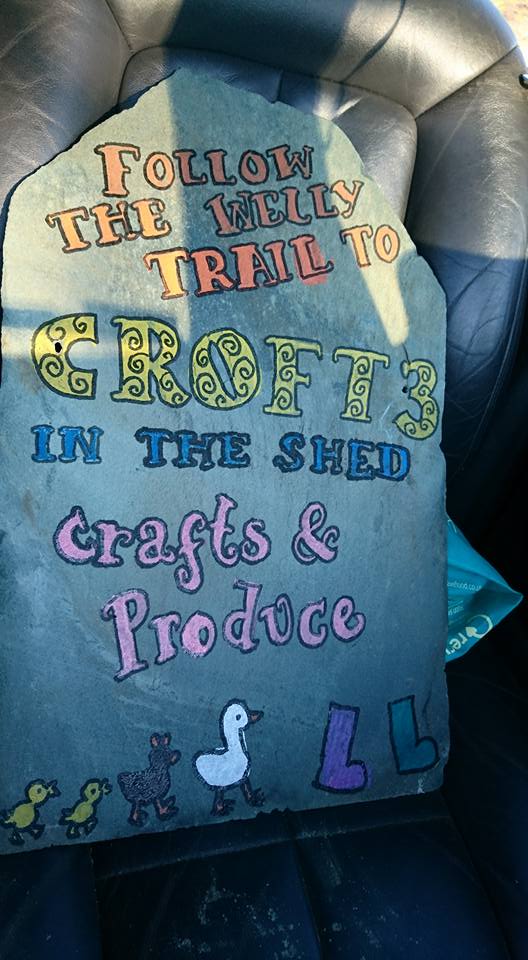 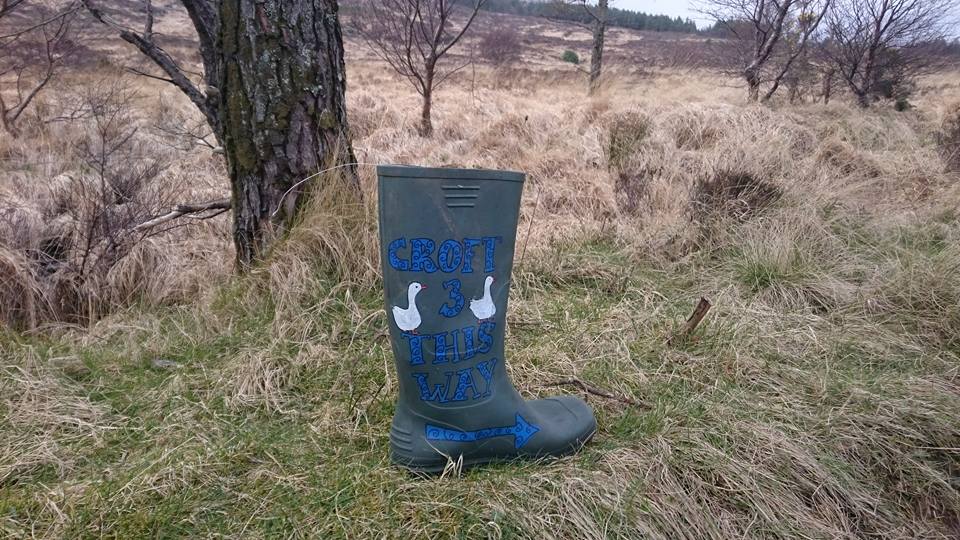 But easily the biggest news is that two of our long planned purchases have arrived. Back while we were off talking about what would make life better for us here on Rum we came up with always on internet and a washing machine on the croft among other things. These were two relatively easy things to achieve and so we did plenty of research while we were off and last week placed orders. Today they both arrived – a 100 watt solar panel, carried up to the croft by Davies and Scarlett and hopefully set up and working tomorrow meaning that we should be generating sufficient power to run the nanostation which picks up signal for our broadband and the router which beams out our wifi. 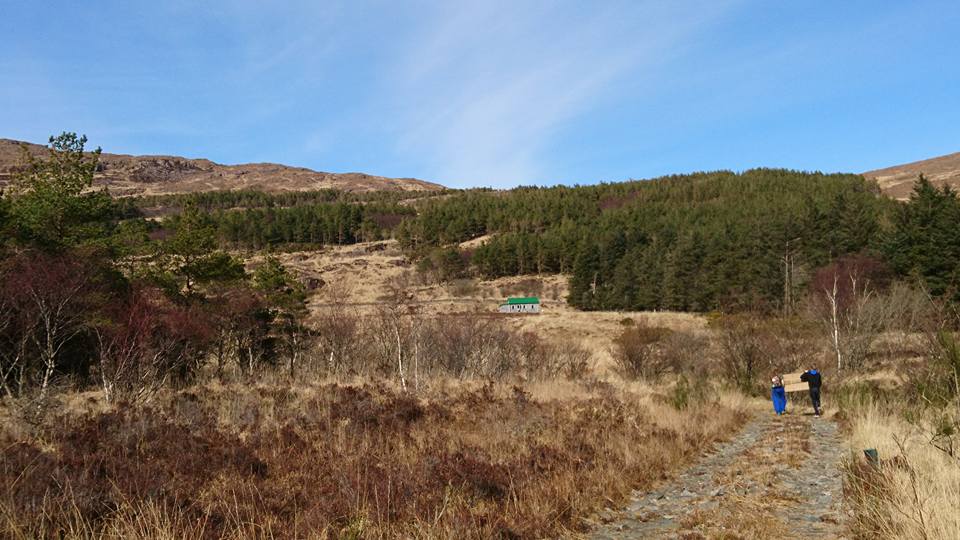 And a twin tub, very low power, small capacity washing machine. It’s not a twin tub as so many of my friends remember having as children, it is very basic, very low maintenance and will require attention and care to operate. We have had automatic washing machines up here on the croft before and although they were a great idea the reality didn’t really work. Automatic washing machines are a bit like toddlers in that in our specific circumstances they are actually not that automatic at all and require constant supervision. Mixing water and electricity even in a standard house set up still needs caution. When your water is piped in from the river and your electricity is a petrol generator and your washing machine is outside there is not much of a labour saving element to it. The start up power consumption is huge – getting water to temperature and pressured filling, then an hour or so wash cycle with a big power need during the spin cycles meant we ended up spending a lot of time watching the washing machine. We then had the dilemma of where to store it – a damp island environment is not great for a delicate electronic bit of kit. In the end we broke the machine down for parts – the casing became a chicken house (and very successfully homed a broody chicken who hatched a clutch of eggs in it), the drum became a fire pit, the motor and electric bits and pieces were all stripped down for other projects or spare bits. So now we have this. It still requires care, attention and supervision. It only washes a small amount of laundry at a time. But it fits in the horse box, runs easily off the generator, we can control the water temperature, the spin cycle is amazingly efficient, it takes about 15 minutes per small load in total and in one hour I had processed a whole load of laundry (in three lots) and had it hanging out to dry. 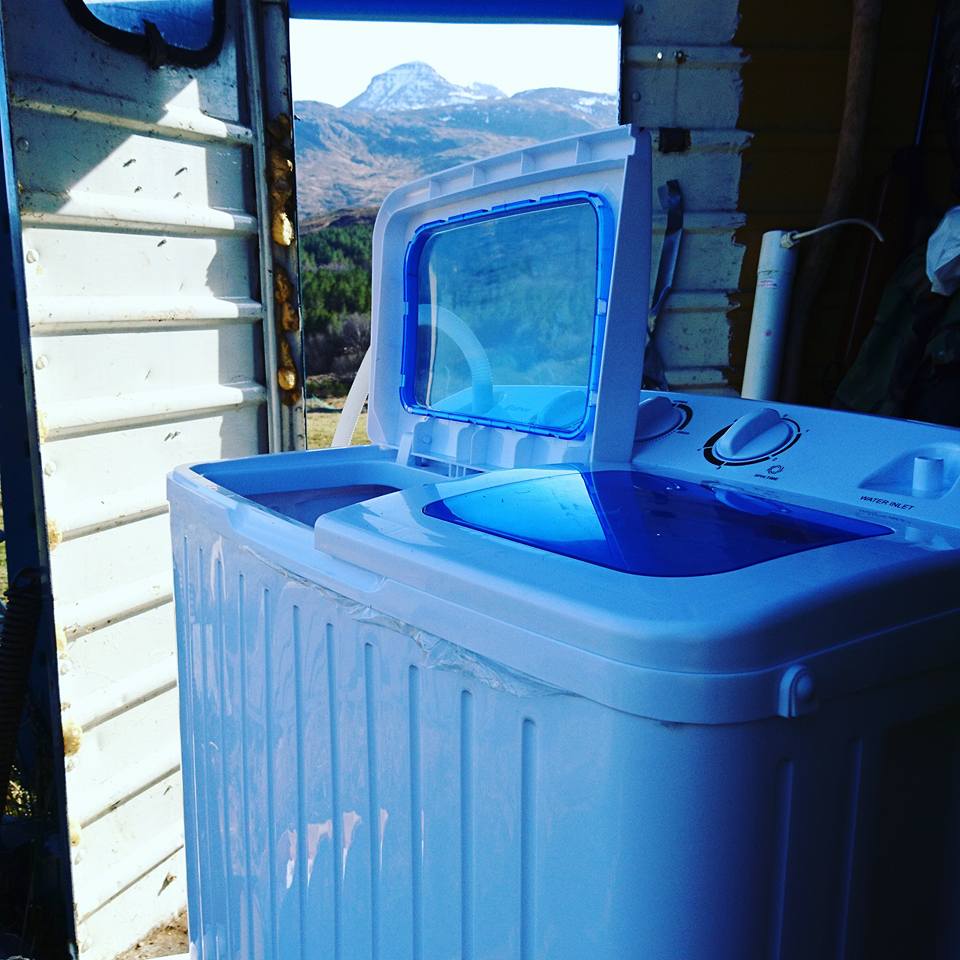 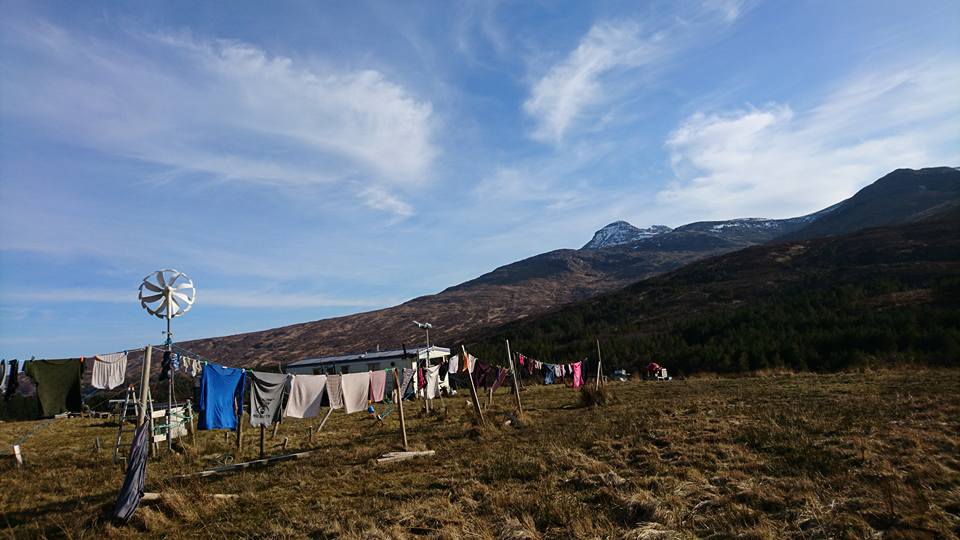 This instead of a 3 mile round trip down to the castle to use the laundry facilities which may not be available for much longer and could take upwards of two hours of our time. This arrangement is within spitting distance of the washing line, easy access to the kettle and that newly always on wifi and means you can potter about doing other things around the croft / caravan while the washing is happening. Not automatic by any means but definitely a huge leap forwards.