I’ve been following an online permaculture course over the last few weeks. I’ve also been reading lots of books and articles on the subject. I’m not going to attempt to describe what permaculture is here mostly because it would take more than this blog let alone one blogpost and I suspect that rather like relationships, or parenting, or Home Education there is a special personal definition of just what permaculture is each and every person that uses it or adopts it’s principles.

What permaculture seems to be to me, so far, is a philosophy of doing stuff. It’s a handy label, a way of explaining generally what can sometimes appear at first glance to be a rather odd or unconventional way of doing stuff. Mainly related to growing or gardening or land but not necessarily. It’s about making the best of what is already there, harnessing what nature provides, only interfering when strictly necessary, observing and working with what already exists. It’s one of those disciplines that the more I learn about it the more I realise it was what we were naturally already doing, it’s just that now it has a name and I find we’re not the only ones doing stuff that way. As a friend said the other day ‘permaculture is another word for ‘common sense”.

Anyway, I’m not intending to reinvent the wheel or even the spiral, but you may find posts peppered with references to permaculture and what we are reading about and learning at the moment is definitely having an influence on our next stages of planning and execution of our long term goals.

So, to the herb spiral. This is a real permaculture classic, mentioned in lots of books on the subject and used as an example of what permaculture is about. I have had to overcome by issue with the way ‘herbs’ is pronounced, along with ‘oregano’ as much of the stuff I have watched online is American  and I definitely have a herb spiral not an ‘erb spiral!

The idea is that you keep things you use often or have to tend frequently close as possible to home. So the herb spiral is something you want to be able to nip out of the kitchen, snip or tear a few leaves from and dash back to bung them in your cooking as fresh as possible. Herbs or other culinary plants don’t necessarily all thrive in the same growing conditions though – some like it sunny and well drained, some damp and shady and others somewhere inbetween. The solution is to create a spiral bed. This increases growing space as you are making use of vertical growing aswell as horizontal. Clearly on 8 acres this is not a big issue for us but in a small garden or balcony this makes sense. You are able to create all the various micro climates to suit each plant’s individual needs in one space.

My spiral is about 6 foot across. I positioned it close to the static – we will use it while we live up here, once we rent the static out as a holiday home (when we eventually build something for ourselves) it will be a nice touch to tell guests they can help themselves to fresh herbs. I went for the west side of the static as it has the most sun for the longest time. I marked out the circle using a string tied to a stick as a compass and some stones we’d gathered from around the croft. I used some slates to make a mowing / strimming edge so that the grass is kept away from the edges and we can mow or strim right up to it without getting too close to the herbs. I laid dampened cardboard down all over the circle to create a sheet mulch. This will rot down into the earth and help to create a nice soil whilst preventing weeds from growing up. 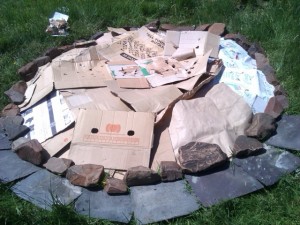 Next step was to create the spiral. I used more stones and marked out a spiral into the centre. I started at the north facing side and worked clockwise with a single layer of stones to make the spiral. I didn’t take photos but you can get the idea from seeing the finished spiral.

Once that was done I filled with a layer of soil. I used bought in compost. This is shocking I know! We’ve not made compost at all here because all of our kitchen scraps go to the pigs. They create their own compost and do a fab job of preparing the ground so I could have taken soil from an area where they have been or taken a slower pace to complete the spiral and let the ground improve itself before planting it in. I could have used lasagne bed technique layering cardboard, manure, matter like seaweed etc over and over to create in situ compost but I was keen to get this project done as I had herbs ready to plant.

That completes the outer circle of the spiral but as the spiral wall closes in to the centre you gradually build the wall higher so that by the time it reaches the south facing centre of the spiral it is at least 50cm high. You fill the created spiral with soil as you go which helps keep the stones in place aswell. You could use various recycled building materials including bricks, glass bottles, wood etc. I used stones because we have loads on the croft land so they were an easy, free building material. The mass of the stones will heat up during the day and slowly release the heat through the cold and the night meaning the soil stays warmer for longer.

Once finished you have a spiral where the lower areas are wetter than the upper areas, the south facing side is full sun and the north facing sides have a range of shade and part shade created by it’s own walls with the east and west facing sides have partial shade at different times of day and differing levels of drainage and soil moisture depending on their height. Everything is within an arms reach but you have lots of growing space.

I’ve planted stuff like rosemary and lavender at the top south facing areas, stuff like mint at the north facing lower levels and everything else somewhere inbetween depending on what it  prefers. I bought in lavender, rosemary, mints (garden, spearmint and Morrocan mint), parsley and lemon balm as small potted herbs and everything else I have grown from seed – so far that is oregano, majoram, thyme, coriander, basil, tarragon, fennel, dill. I have access to some wild garlic and wood sorrel growing in a friends garden she is happy for me to dig some of up so that will go in soon too.

It looks fab and I am really pleased with it. It’s had a couple of days of full sunshine and today and tonight it is getting properly rained on to water it in so we’ll see how it performs. I may stick some alpine strawberries in the gaps in the stones and I have some edible flowers like nasturtium and borage to put in too. 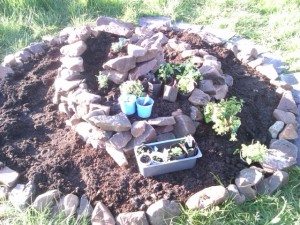 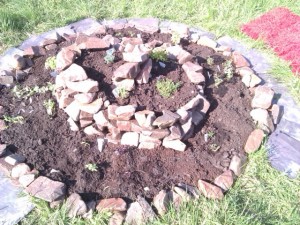 One thought on “Circle in a Spiral”