It turns out that assuming nothing much will happen in the last couple of days of 2015 so you can sum it up a bit early was wrong.

It turns out that making rash hopes like flying over the croft by helicopter and going off Rum more often may well come back to bite you on the backside.

In the early hours of 31st December Ady developed severe abdominal pains and started being violently sick. I sat in the only place in the caravan with mobile signal and spoke to NHS 24, a doctor, the coastguard and the Royal Navy helicopter base. Davies was still awake anyway so got up to sit with me and we woke Scarlett. Ady was incoherent with pain and barely conscious. Having explained that I could try and get him down to the village where the helicopter usually lands but it would be a mile walk it was agreed they would try and land on the croft. Rum coastguard came up to mark the site and bring the defib and the helicopter landed just outside the caravan. 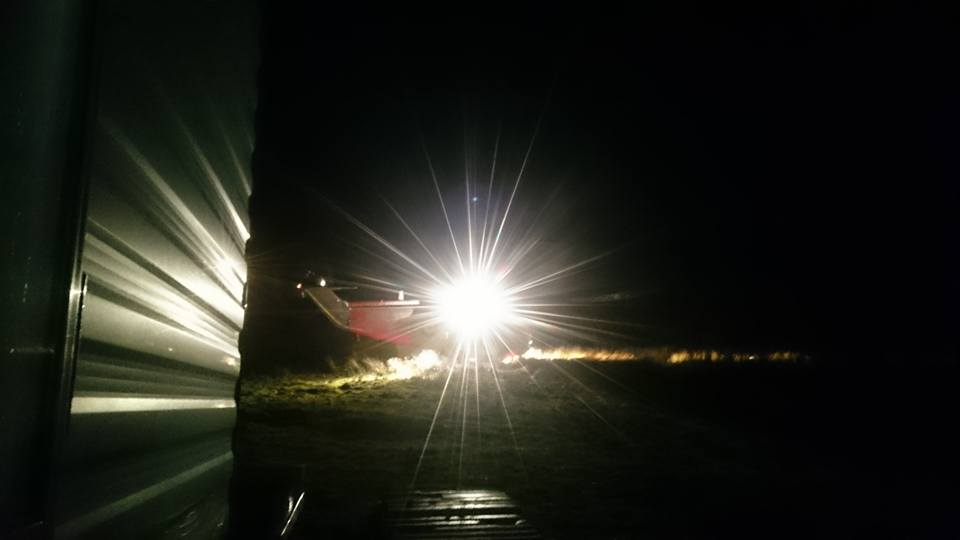 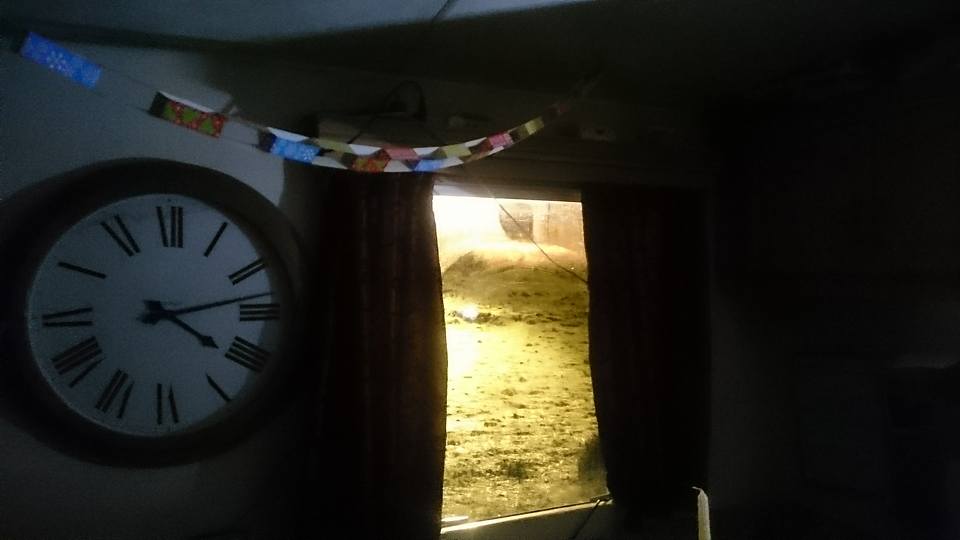 The walls shook so much we had to take the clock down! After 3 hours of sitting in the dark concentrating on not panicking followed by a chaotic ten minutes of the paramedic taking details and helping Ady into the helicopter everyone left again. The lighting battery had long since run out so we had no lights in the caravan so by candle light Scarlett made Davies, her and I hot chocolate / cups of tea and then they went to bed to try and get some sleep.

At that point I lost phone signal so had no way of getting any updates or the hospital reaching me. I am not sure I have ever felt so alone or vulnerable. I could not get hold of anyone even if I’d wanted to without walking down to the village, either taking the kids with me or leaving them up at the croft alone. It was freezing cold with the fire long since gone out and with only torch light or candles. I didn’t know what was wrong with Ady and was very, very scared. I was not sure how much fuel was left in the generator and didn’t want to try and refill it by headtorch – we have a rule that neither of us ever does anything potentially risky up on the croft without the other adult around, just in case. The wind turbine battery had just enough power for me to get the internet on to book a hire car and a couple of nights accommodation near the hospital in Glasgow that Ady had been taken to and I found an app to down load to my phone to let me make calls by wifi so was finally able to reach the hospital at about 6am. I spoke to Ady himself who was high on morphine so not making much sense but no longer in pain and obviously in the right place to be looked after.

I laid in our bed for about an hour until it was light enough to get up and start clearing up the caravan – washing up from the night before, muddy footprints from all the people coming in and out in the middle of the night, packing up ready to head off and making a bit of a list of things to do / remember. Once again Scarlett was a huge help – she fed the animals, cleaned the muddy footprints, insisted I ate something and packed food up for us to take on the drive, emptied the fridge into a bag to put in the freezer and helped me think through everything.

The morning was busy – Rum friends coming up to help make arrangements and offer help, take away Bonnie’s crate and food, phone calls to cancel one lot of accommodation and sort out another, lots of phonecalls from Ady updating me on what was happening with him. People came to the ferry to see us off and as I got on the boat, still warmed from hugs and well wishes I realised that in a few short hours I had gone from thinking we needed to pack up and leave as soon as Ady was well enough because living so far from civilisation in such a vulnerable precarious position was quite simply the most stupid thing anyone could ever do, to feeling that with a sense of community and support this strong and such wonderful amazing friends we could never consider living anywhere else.

1.5 hours on the ferry – aside from one other passenger we were the only people on the boat besides the crew, then a 3.5 hour drive down to Glasgow. Through snow at Glen Coe, surface water on the windy road beside Loch Lomond, a dark rainy night on no sleep at all. We’d taken an audio book to listen to and Scarlett kept me alert by chatting and feeding me humbugs. Finally we pulled up at the hospital, parked and found Ady. He was giddy with morphine, slow from lack of sleep and the trauma of the whole experience but alive, which at various dreadful moments during the previous 18 hours I had seriously worried about.

2015 was seen out and 2016 seen in by Ady in his hospital bed 2 miles away from Davies, Scarlett and I in our hotel room. We probably watched the same fireworks around Glasgow at midnight. The first new year I have not seen in with Ady in 24 years.

The subsequent few days have seen Ady on intravenous antibiotics, blood thinning drugs but thankfully no further need for pain killers. He has had an ultrasound scan which has shown a fair quantity of gallstones in his gallbladder. We are waiting for a MRI scan to ascertain whether the surgery required will be simply just removal of his gallbladder or whether there is a rogue gallstone wandering around to be dealt with first. Hopefully in the next couple of days we will have answers and some idea of timescales in order to make further plans.

We are yet to fully process it all properly really, still in coping mode and reacting to the whole thing. There is already a huge sense of relief that it was nothing more sinister or frightening and an overwhelming feeling of gratitude at the love, support, kindness and caring of our wide circle of family and friends. I have gone from feeling so utterly helpless, alone and isolated for a few hours to feeling cocooned in a blanket of love and friendship. Ady and I are already starting to think about things we could / would have done differently, what we need to do for the future in terms of first aid kit, accepting that while it feels hysterical to call 999 and summon a helicopter we probably do know enough to make that call at the right time rather than being timid and shy about doing so, realising that a checklist of passwords and phone numbers for various people and places and a back up set of lights would be really useful. We both know that if the roles had been reversed and it had been me helicoptered off Ady would not have managed the organisation of getting him and the kids to my bedside in the same way as I did because I have always done the mainland trip planning.

Top of my list of ‘when everything is back to normal and we’re home again’ though is sitting down on the sporran with a stiff drink and having a bloody good cry!

8 thoughts on “Careful what you wish for…”