Ady has been busy with the grass cutter machine. The croft is slowly transforming from reeds and ragwort to grass and clover. We’ll be leaving large areas to stay as wild areas for the butterflies although actually there are far more flowers coming up on the sections we are starting to tame. The sheep and geese need the grass to graze on though and we are starting to get the ragwort under control with lots of cutting. Ady’s also been out with the strimmer in the fruit cage and walled garden to ensure the plants and bushes don’t disappear. And we’ve been out maintaining the welly trail too with a spot of cutting the overgrown undergrowth around them.

I harvested the first crop of blackcurrants and along with some lavender made a few jars of jam. Not enough for selling but it’s topped up our own supply of jam, which is good as the three jars of strawberry jam have already all been eaten. I also harvested the first crop of potatoes, was finally ruthless enough to throw out the straggler tomato plants and begin a compost heap (usually all waste goes to the pigs but I could actually do with starting to make some compost), thinned out the strawberry plants and began plotting to dramatically increase the area for strawberries as they seem to really thrive here as long as they are under plastic. I’ve sown some more herbs, salad, potatoes and peas too.

We have built a pen around the newly planted artichokes which we had started off in pots and were now large enough plants to put out direct into the ground. They need protection from the wild deer, plus our sheep and birds though so we created an area around them which hopefully will keep everyone out. 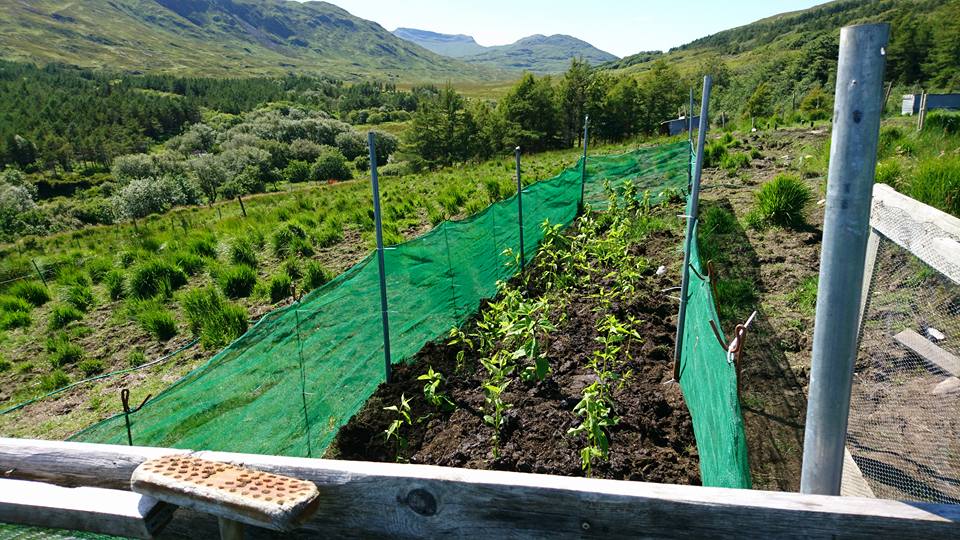 When we decided earlier this year to go off for the winter and re-evaluate we also decided we would carry on as though we were planning to come back but not do any big projects or make big investments or commitments this year to Rum or the croft. It’s quite good fun trying to come up with ways to get around some of this years challenges without spending money or getting in more resources.

All is quiet on the animal front just now. The broody goose gave up in the end and is back with the gaggle. The eggs she was sitting on came to nothing just like the turkey’s. By this time last year we had pen fulls of ducklings and chicks, I wonder why nothing is happening this year – could it be weather related? June was such a dire month that perhaps conditions just were not right for things to happen. Not sure.

The sheep are getting every more friendly – all three will now come, albeit hesitantly, to have their heads scratched.

And the indoors stuff? I came up with an idea for another new freeform crochet line to sell – notebook covers. So I bought some notebooks while we were off and have made a couple so far. I really like them and the best thing is they are re-usable – once you have filled up that notebook you can slip the cover off and put it onto a new one. Or a sketch pad, or address book (does anyone have such things any more?), diary or journal. 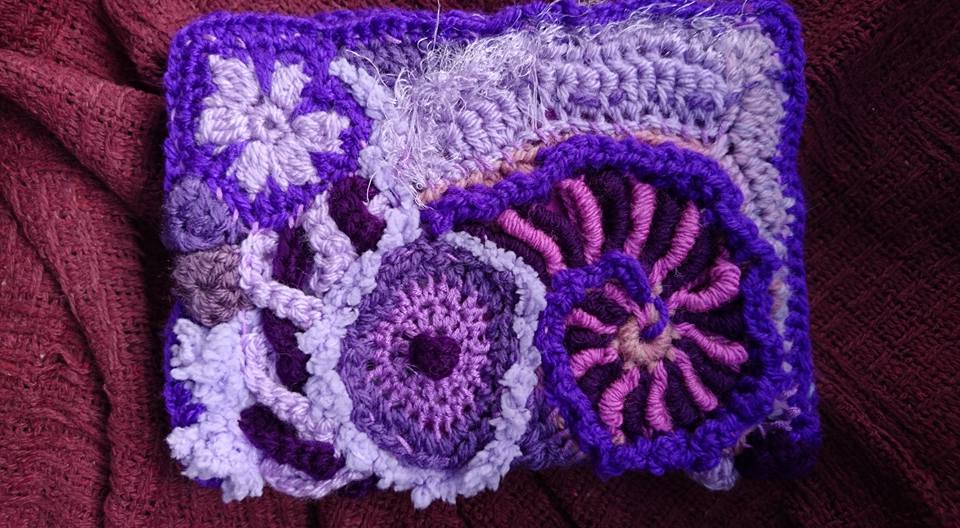 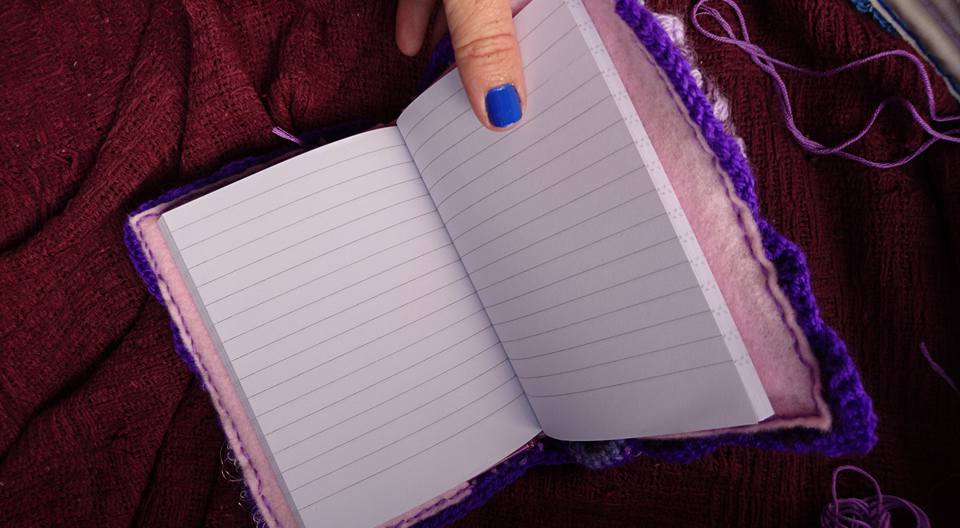 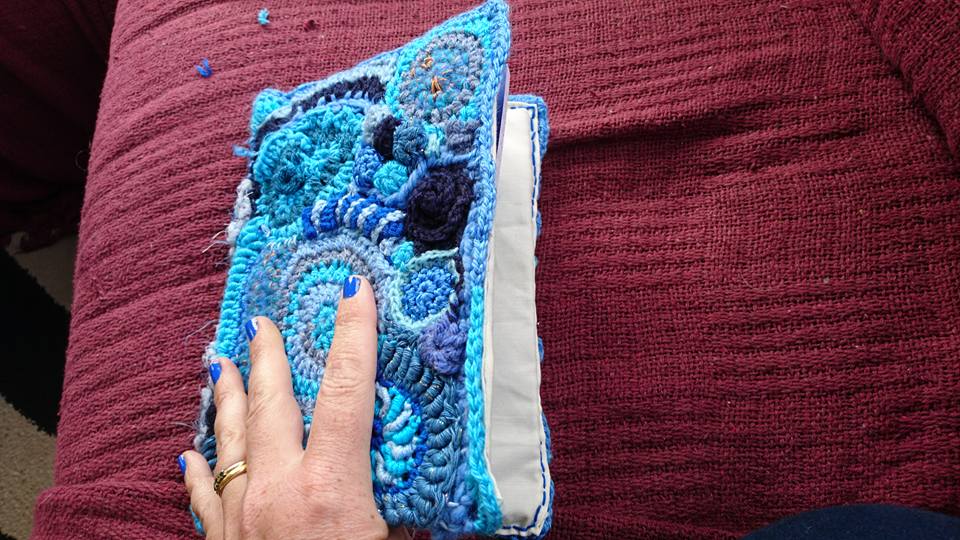 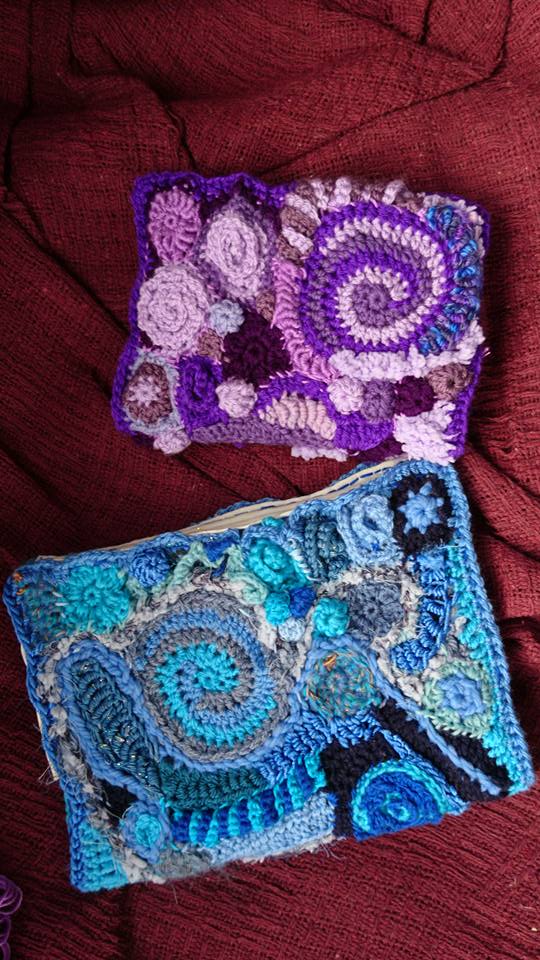