I know it’s only August and I know that spring never seemed to arrive here this year let alone summer but the nights are drawing in, social media is filled with Back To School and having made our peace with the fact we face another winter in the caravan we’ve been making the most of being trapped indoors by the alternate rain and midges we have been planning how to make the best of that prospect.

It’s been a funny ‘season’ with low visitor numbers generally but thanks to a few shifts of castle tours, my regular Saturday morning post office duties and being Mrs Teashop on a Wednesday I have probably talked to more visitors to Rum this year than usual. Add to that the in depth dipping into our lives here which will be shared with the world tomorrow and chatting with not one, not two, but three sets of people this week who showed more than a passing interest in the prospect of starting a life of their own here on Rum plus the five volunteers who have spent time with us here on Croft 3 this summer and you have a fairly full on autobiography monologued. It’s not all about us and our lives though, there has been the usual ‘how many children in the school?’ and ‘what do you do in winter?’ and it’s definitely been a year for feeling more scrutinised than usual.

It could easily have been a year for feeling more judged than usual too – we’ve been pretty hard on our ourselves at times about what we have not achieved and perhaps not celebrated our victories as well as we should have done. I spent some time in the polytunnel this afternoon, weeding, tidying and being ruthless with tomato saplings which simply don’t have enough time left to do anything noteworthy this year. We picked enough raspberries between the wild ones walking home from the Sheerwater boat trip and what has grown in the fruit cage to make a single, sacred jar of raspberry jam, there will be sufficient peas in the raised beds to create a serving for a pixie and I think we’re on track to harvest three carrots. Which is good, as only three out of four of us like carrots! But I read on one of the various forums for self sufficiency and back yard homesteading a thread of other folk all up and down the UK talking about poor crops, struggles with weather and feeling disheartened and realised this is just a bad year. Just a Bad Year. One year, and we built our own polytunnel which works and next year we’ll be planting far earlier in the season. And we got almost all of the raised beds weeded and planted up. And the fruit cage is filled with trees and bushes which are all alive and if they don’t fruit much this year then they’ll be conserving energy for next year maybe. And we learned so much about volunteer hosting and what we’ll do better and differently next year. And the pigs are growing well and the ducks and geese all reared young and the woodshed is full.

We’ve invested in a load of vacuum bags to store all the out of season clothes, bedding, wool and material for my crafts and they are now all tidily stashed away with no risk of going moldy during the damp winter months this year. And we’ve got more room in all the cupboards and wardrobes too. We’ve ordered new curtains for the caravan, it will look nicer and be warmer and more insulated in the cold. We’re trying to make it both a nicer space to be in and a more efficient shelter. We are also investigating upgrading our wind turbine to something more able to deal with the extremes of wind here on Rum.

If autumn is coming, and it is, sure as night follows day there is no sense in mourning what didn’t happen this summer, instead we need to be mindful of what needs to happen in autumn and winter and start preparing for that instead. There are brambles to be picked, pigs to kill and process, firewood to gather, winter crafts to plan. If the summer this year didn’t bring sightings of minke whales, dolphins and orcas then autumn will compensate with the red deer rut, breath taking sunsets and the northern lights.

Life here is about taking stock, accepting, learning and moving on.

Today I walked around the three sides of the croft that the nature trail takes in. Along the river, through the woodland, past the pigs. I gathered some wild flowers, grasses and rushes as I went to bring a little of the summer inside the caravan. I paused at the dry stone wall which marks the north border of our croft and continues across the island for miles. It’s a stunning spot, right next to the waterfall. Blue sky overhead and the sights, sounds and smells of life other than humans. The waterfall tumbling down, bees buzzing around the bramble and honeysuckle blossoms, dragonflies clumsily flying around me. A reminder that life is not all about people. Then I walked a little way up the hill and looked down – boats in the bay, Ady carrying fence posts across the croft to extend the pigs run, Scarlett running across to feed the birds, washing on the line. Life is very much about these people. 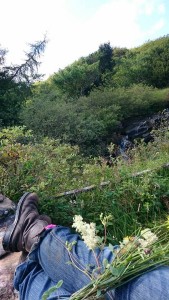 4 thoughts on “Autumn’s hand on my shoulder…”