Spring has well and truly sprung here on Croft 3. We may still be getting frost, snow may still adorn the high peaks and we are a long way yet from giving up the fire and hot water bottles at night but the Croft 3 creatures are telling us that there is more than just the extra hours of daylight to herald the change of the season.

First the birds. We started getting the odd chicken egg a couple of weeks ago but now we are collecting up to have a dozen eggs again each day, the cockerels are crowing and mating the hens and I really need to spend some time working out quite how the cheeky bantam that keeps getting into the fruit cage is managing it and block her entrance route.

The ducks are also in full on spring mode which sadly means that in their mating and egg laying they roam further afield. We keep spotting them way over on the other side of the river in the woodland and although we know they are laying eggs as we managed to collect one we will need to start penning them at night again to ensure that we are the ones enjoying duck eggs (or selling them!) rather than the hooded crows.

We found the first turkey egg of the year yesterday and today watched the stag turkey mating one of the hens. We have decided not to buy in any more turkeys so it really is down to these four to provide us with bigger numbers, particularly if one of them is to avoid being Christmas dinner later this year…

The geese are always the first to let us know spring is coming as the two ganders suddenly get properly feisty and start chasing us and hissing. They particularly like to run after Ady and bite at his wellies! A couple of the girls had started laying back where their nests were last year but as this is directly under some larch trees where the crows hang out it was a foolish location and their nests were quickly robbed by the crows and the ravens who took all the eggs. They seem to have learnt though and have built a new nest in a far better location which currently has five eggs already. If they carry on using that and one of them starts to brood the nest we will construct something around them to protect from getting hassled while incubating the eggs and to keep the goslings safe. 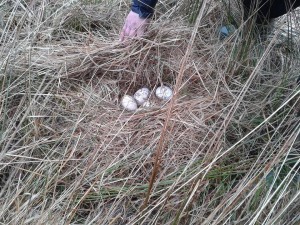 We have never known what gender our guinea fowls are but some googling tonight tells me we have at least one female (you can only really tell by their call and we definitely have at least one giving the two tone shriek!) so we may even have guinea fowl eggs or even babies I guess.

But the big news on the croft is that Barbara Pig had her babies! On Sunday 29th March at about 4pm she finally went into labour. Scarlett and I sat with her as she went into a trance and was all but unconscious with no awareness of what was happening around her. After half an hour of heavy breathing and pushing we watched the first spotty little piglet be born, stay still for that first split second of life then wriggle and cry out, thrashing around to remove the birth sac and then straight up onto its feet, unsteadily making its way to Barbara’s belly where it latched on for a feed. It was amazing!

Over the course of the next six hours we sat, curled up together with Barbara as it gradually got dark outside and the wind blew, the rain rained, the hail hailed. Ady and Davies visited, brought us torches, a blanket to sit on, cups of tea. Ten more piglets were born giving us a total of 11. Barbara remained in a total trance for the duration so the wee piglets are utterly fending for themselves at that stage, the first born for over five hours. One was born still totally in its birth sac, two more were born not breathing or moving so those three required lots of intervention from us, a couple more were feeble and would likely not have made it to Barbara’s teats for that important first feed and more than once we had to redirect a roaming piggie as it went off track in its first intrepid exploring. We kept them warm, kept them close to each other and Barbara, cleaned them off and generally watched over the whole procedure. I now completely understand why we lost half of both the first two litters. 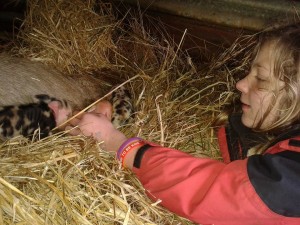 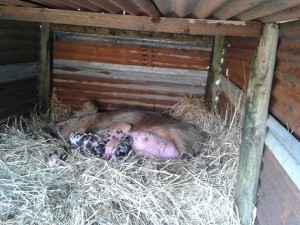 Scarlett left about 930pm to come in and warm up, I stayed til the end, around 1030pm for the final three, the afterbirth and Barbara snapping out of her trance, getting up and being very surprised to see me so close to her newborns and in her pen and clearly not happy with me being there. At which point I stacked up some straw around the nest she had already made and decided to call it a night having realised how cold, wet, tired and hungry I was actually. Back indoors for a shower, clean clothes, a glass of wine and some dinner.

Scarlett and I agreed it was an amazing, awesome experience we were so grateful to have had. I have seen plenty of eggs hatch and various sheep deliver lambs but this was a whole new experience for me to be so involved. I loved it and was very moved by the whole thing.

Sadly, but rather predictably with such a large litter we have already had casualties. One of the piglets managed to get outside the pen this morning between Ady checking them at 730am and me checking them again at 930am and was dead, cold but untouched. I guess with 10 others to tend to Barbara would not have responded to his cries if he made them. Despite checking them every hour or so throughout today we found a second one dead in the pen this evening when Barbara came out to feed and I went in to check them all over. This tiny one had been crushed, which is pretty common, particularly with such a large number of piglets. I guess this is why they have such big litters. We have put a barrier across the pen which will hopefully deter them from wandering out until they are big enough to wander back in again too but the crushing is a hazard we really can do little about. Hopefully Barbara finds her slightly smaller litter of nine a little easier to manage but having realised how lucky we are both to have such a large litter and to have got them all born and through their first night if not far beyond we are grateful for every one which survives.

One thought on “Animal Behaviour”