Dragon and Star are Home Educated, or I guess for this year Van Educated, or Farm Educated or Field Educated, or simply Left To Their Own Devices, whatever you’d rather call it. I usually don’t try to categorise anything we do as it rarely fits neatly into any one box and I don’t like labels much anyway.

We have always Home Educated and with children aged 10 and 8 it is now simply something we do rather than anything we think much about, but it is obviously something we are spending time talking about a lot at the moment as we meet so many new people. We are also finding that as life has changed for us this year so has the way we all learn, not just Dragon and Star. We have always followed a child-led or autonomous approach to education, believing that being given the freedom to decide what to learn for themselves with us playing a role as facilitator is the best way. This year though life has obviously changed and the opportunities for learning are different, sometimes more thrust upon us and sometimes trickier to find.

I think a school-at-home or rather more structured approach to education can be far easier to quantify as it works nice and logically through a curriculum and progress is easier to chart. Our approach can be rather more haphazzard with days, weeks or even months going by with nothing easily identifiable as ‘Educational’ being covered (although if like me you subscribe to the philosophy that we are all constantly learning all the time that is less of a worry) and then a run of stuff all learnt at once in a rush. This year is likely to prove a similar experience I think with a trickle of education all day every day and the odd burst here and there of epiphany, thunderbolt or educationally very rich moments. I suspect that in a roundup of the year it will be incredibly easy to show what a rich learning experience it has been but that odd days or weeks will look in isolation as though very little happened.

But I like a challenge! So when May rolled round which is traditionally the month when for the last 6 years we have captured a photoblog of our day to give a snapshot of our Home Ed life I didn’t want to miss a year. If you are interested in reading a bit more about our Home Ed journey before now, or looking at previous photoblog days for contrast a very sporadic blog can be found at Monster & Teeny  with photoblog posts for 2010, 2009, 2008, 2007, 2006 and 2005 . You can see why I didn’t want to miss a year!

This May we have already stayed in 3 different places with another one due before the month is out, spread across five different WWOOF hosts in three different counties. No two days are the same so I simply chose today because I happened to start taking photos fairly on in the day. This week we are sleeping and breakfasting in Willow, then working with one of two different hosts (we are being shared between neighbouring farms) who feed us lunch and dinner.

So we woke, turned the van from a bedroom into a sitting room, had breakfast, got dressed and spent some time chatting to the host who’s land we are parked on as he was moving his small flock of sheep around into the field next to us. Our host for today, Peter, arrived to pick us up and we jumped into his car and headed for one of his fields about a mile down the road. Tasks for the day once we’d introduced ourselves to each other were to have a guided tour of said field which is part woodland, part allotment. The woodland is a mix of mostly native trees planted by Peter over the last 5 or 6 years. Various orchard fruit and nut trees, several wild varieties, some evergreen, some deciduous with the long term intention of creating a woodland for years to come. Multi purpose as it creates shelter for the allotment part of the field, it creates a woodland useful for wood in years to come, it warms the area up by a few degrees and is simply good for biodiversity, wildlife, privacy and screening of the field and so on. It was fascinating to see which trees were doing better than others planted at the same time and try to work out why – shelter, proximity to other plants, disease, weather damage, water level in soil and so on.

We planted one of several trees Peter had brought along with us, telling us that you should not be planting trees at this time of year and all the reasons why not but explaining that sometimes you just end up with a tree that needs planting and so have to do so and what ‘special measures’ can be taken to give it the best possible chance and negate some of the factors for iit being the wrong time of year. Dragon and Star got a great lesson in tree identification, planting techniques, working out the weight of water by the volume, seasonal gardening and climate and some practical skill learning in digging, breaking up soil, watering, putting on cardboard and grass mulch and got to use tools such as wheelbarrows, fork, spade, watering can, knife etc. 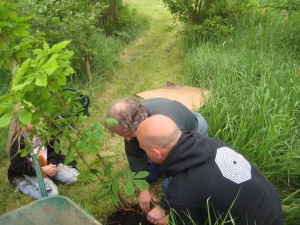 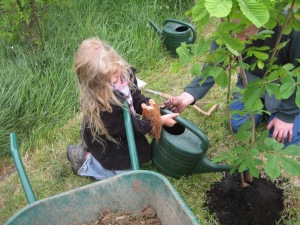 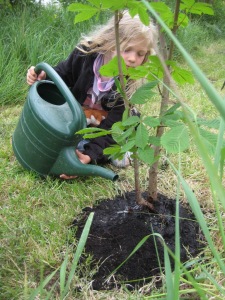 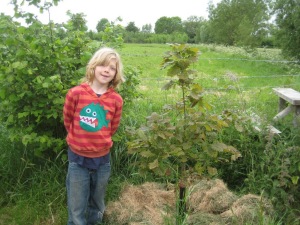 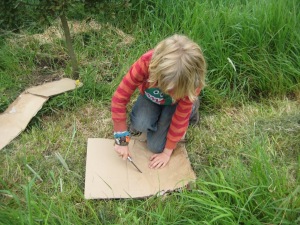 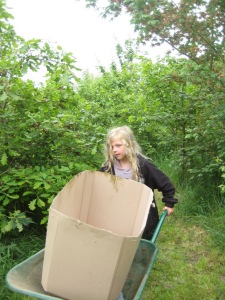 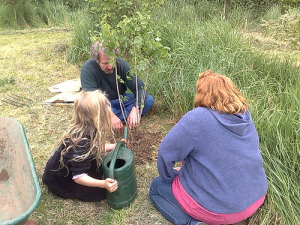 Then it was tea / lunch time so we retired to some chairs near the shed, a kettle was boiled, tea was drunk, food was eaten and further conversations held. So much of our Home Ed day revolves around conversation, so much of our WWOOFing experience and learning revolves around conversation and today was no exception. I have already forgotten large amounts of what we talked about today and indeed to record it all here would be far too many thousands of words anyway but I do recall that when this photo was taken we were talking about languages. We were discussing Welsh, which my Dad speaks and any Welsh words I knew, how people learn language and whether French people learn to speak French from birth like we learn to speak English (or other mother tongue) or whether they learn it how we would learn a second language. I was explaining about Mother Tongue, Bilingual, citing some real life examples of people we know who learnt to talk using two different languages from babyhood, another friend who lives in the UK and says she now thinks and dreams in English despite being German and having that as her original first language because she has been here so long and talking about how written language is different again and that for example the word we or wee in English is not actually the same as the word Oui in French despite sounding the same, how the word for both white and grandfather in Welsh is the same but by knowing what context it is being used in you would be able to know which meaning it had each time. 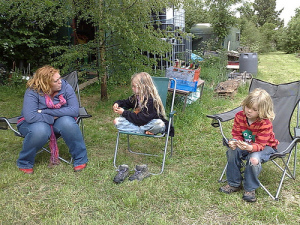 Then we planted another tree so a repeat of the above, before heading back to the allotment area to water the raspberry canes, get a lesson in weeding and talk a bit about crop rotation, green manure and comfrey 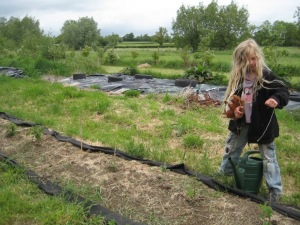 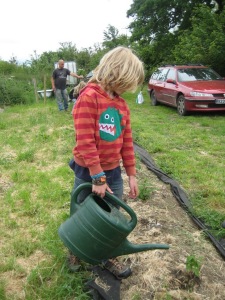 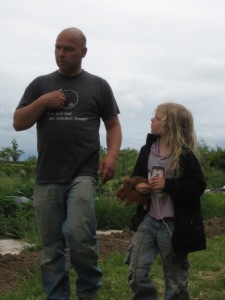 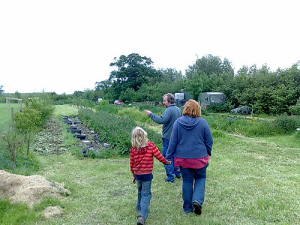 Another cup of tea, more conversation and then a brief car ride to the woodland Peter has where they do various community projects including Forest School, green woodworking, bushcraft and survival, chainsaw and tree felling lessons and more. We had a tour of the area including a go on the very cool swing, a sit in the very cool chair at one of the fire circles, a use of the compost loo and a quick lesson in how it worked and a look round the kitchen with rocket stove, earth oven and other such cool kit. 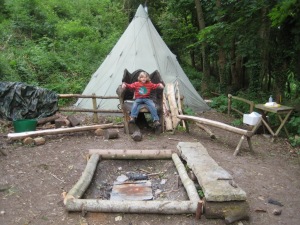 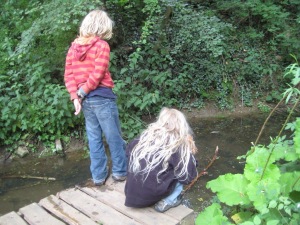 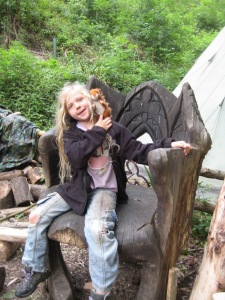 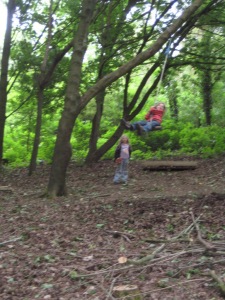 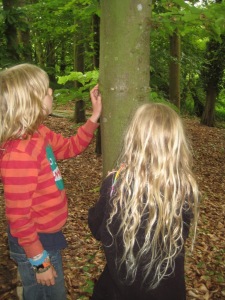 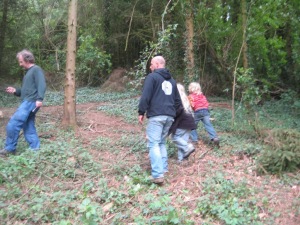 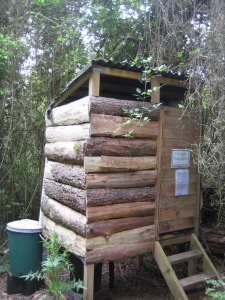 some wildlife stuff such as looking at the tadpoles in the pond and discussing life cycles of frogs – frogspawn, tadpoles, froglets and so on, some more tree identification including looking at damage to trees from deer, rabbits, woodpeckers, some spotting of bugs and beetles and listening to bird calls and a tour of the woodland including looking at which trees had been felled and what impact that had had on the surrounding area, which trees would be selected next for felling and why and discussion on forestry, woodland management, what is coppicing and pollarding and tree diseases. We talked about which trees are good for what including their wood as timber, for burning and so on. 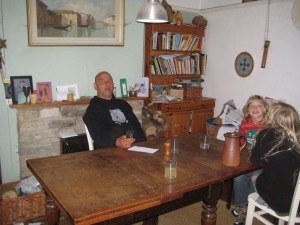 Then back to the van 🙂 We sat and chatted for a while, talking about our day, what plans we have for the rest of the week and for the week after that. Dragon and Star made themselves some toast as a pre-bedtime snack: 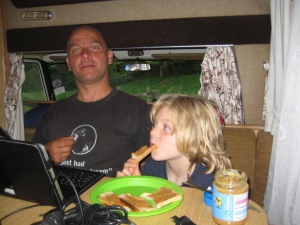 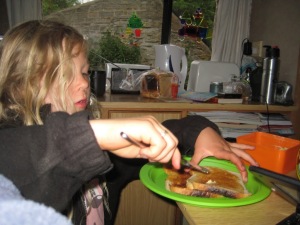 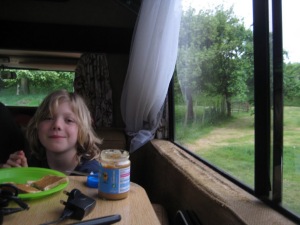 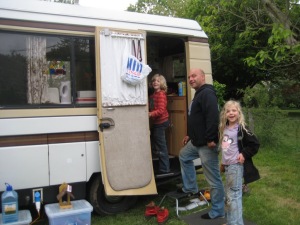 Then teeth, pyjamas and ‘up to bed’ which these days all happens from one single standing point in the middle of the van 🙂 with ‘up to bed’ meaning a clamber up to their bunk. Tonight we were reading Esio Trott (we’re on a Roald Dahl kick at the moment, I think we’ve read most of them before but we re-read The Twits a couple of weeks ago and have been enjoying going back to a couple of other old favourites). 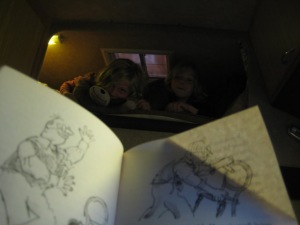 Ady and I carried on chatting so Dragon and Star ended up contributing to the conversation for a bit longer before they fell asleep.

5 thoughts on “An Atypical Day”