Way too much of the deep stuff of late and not nearly enough of the frivilous, frippery, fluffiness. So what else have we been up to in and around the angsting about this time next year, this time last year and everything inbetween?

I made some home made Baileys. It’s gorgeous. I admit to being a liqueur nightcap sort of woman and Baileys or Amaretto are my tipple of choice to do that warming from within before heading to the arctic end of the static. Except I’ve only ever really bought store own brand versions of both and that is not an option here on Rum where despite being a fabulously well stocked shop RumShop does not stock own brand of anything.

So I found recipes online for home made amaretto which I have been doing for months now and then it occurred to me that maybe Baileys-a-like can be made at home too and sure enough it can. And I had all the ingredients to do so. So I did, and it’s lovely.

I’ve also been steeping some ginger in vodka for several weeks. I sampled a bit tonight and it’s divine – sort of fiery vodka. I’m planning to keep half as ginger vodka and the other half to be a ginger liqueur by adding some syrup solution. I might even think about making a ginger cream liqueur – oh the possibilities!

But it’s not just about the booze up here. I’ve also made some jars of preserved ginger and two massive jars of pickled onions. And our Christmas cake is being regularly fed with brandy and my mincemeat is looking and smelling divine ready to make the first batches of mince pies as soon as December arrives.

Craft wise I have been mightily distracted by my patchwork fleece which is about half covered in autumn shade rectangles. It will be gorgeous when it is done but is very time consuming. I am torn between wanting to do that and nothing else so that I finish it in time to get some wear out of it this winter and knowing that there are other crafty makes I should be getting on with to top up supplies of home made items for sale next year.

Davies ordered his Christmas cards today – he’s invested about half of his postcard profits from this year in a design of Rum Christmas cards. I’ve already bought some of him to send to family and friends and am confident he will sell out. We looked at speculating to accumulate, investing in stockholding, pricing to sell vs pricing to make most money and debated quality vs price. He’s going for high end – that boy has luxury taste in card finishes!

Much excitement here last night when Ady popped his head out of the static and called us all to come and look at the snow. SNOW!!!! We love snow. It then gave way to heavy hail but when we all went to bed it was snowing again and this morning Rum was even prettier than usual with a heavy dose of frosting on top. 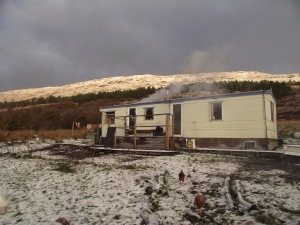 It’s all of our animals first experience of the white stuff as although we saw snow on Rum last winter it was only on the higher peaks and never made it as low as the croft. 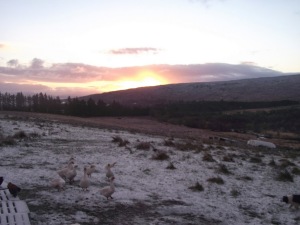 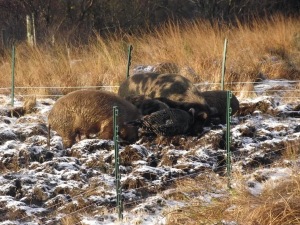 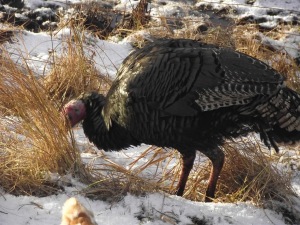 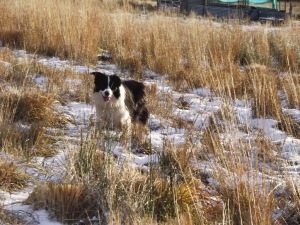 They all seemed fine with it. Meanwhile Davies and Scarlett did what any self respecting children do when snow falls overnight – wake up early, shriek, put on warm clothes and go outside to play in it until tingly fingers, rosy cheeks and pink noses drove them back indoors for hot chocolate. 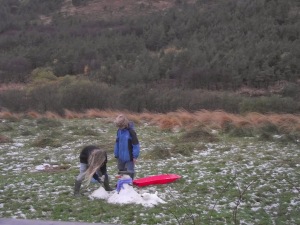 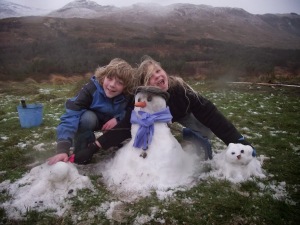 They walked down to the village while Ady and I listened to Popmaster and we caught them up in the car to meet the ferry.

Lots of Rum folk were bemoaning the cold but either we are rough tough crofter types these days or the no sense no feeling idea has finally kicked in because we are staying toasty warm indoors with our log burner. We’ve stopped measuring the wind in mph and moved to watts generated from the wind turbine.

One thought on “Adventures on Croft 3”