And so they begin 🙂 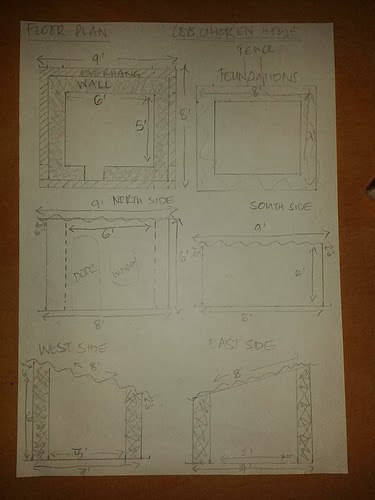 When we first moved to Rum it was our intention to live in our static caravan for a short while until we built a house. We’d always felt it was really important to get to know the location properly before actually committing to building so planned a full year – seeing where the sun rose and set, where it was most windy and most sheltered, where never dried out during the winter and what happened to ditches, rivers and burns over the course of a year.

Our caravan is sited on the first flattish bit of the croft, oriented east-west to take the smallest amount of the winds. We put a fair bit of thought into it but after nearly 2 years I can give you a full list of the things I would change it I brought it here again (not that I would ever, EVER bring it here again!). It would not put it as high up the croft as it is, it is the biggest pain carrying every single thing up that hill, from 47kg gas bottles to sacks of potatoes and firewood, I estimate I have climbed that muddy hill several thousand times in 2 years, almost always carrying something heavy!. I would keep it east-west as it does indeed not then bear the brunt of the winds but I would spin it round 180 degrees so that the bedrooms are on the south side and the kitchen on the north side. This would mean the bedrooms would get sun, even in winter and probably be less damp and condensation-y and the fridge and sink with storage underneath would be cooler and shaded. Those are the sorts of things you want to have occur to you before you built something permanent!

So we planned a timber framed kit house and even had provisional chat with the local planning department about location and style. We talked to local builders about best siting within the croft and took advice from all corners about materials, design, style, supplier etc. We listened to everyone and everything they had to say and took it all on board. We had quotes for metal agricultural style buildings, log cabins and huts. I think we tried the patience of pretty much everyone as they all seemed to give up on us and stop believing we had any intention of building anything. Meanwhile we quietly observed the land and stuck the odd post in here and there to mark places. Places that had stunning views or made us feel right. We stood facing east in the early morning, west at sunset, south overlooking the river when it was in spate, running fast and furious or just trickling along. We thought about power, water, sanitation. We pondered wind, rain, sun.

For financial reasons (our house not selling) the conventional route to building a house didn’t happen. For philosophical reasons a conventional route to building a house is probably not the right path for us anyway. When we set off on this adventure a house build was never part of our plans but having had it come up we are determined that we make the most of the opportunity and build something that reflects us, is beautiful, fits into it’s surroundings and is as much of an adventure and learning opportunity to build as possible.

We have a bookcase full of books on green building, regularly turn down page corners on lovely houses in Permaculture Magazine, Mother Earth Magazine and other such publications and Ady and I are always emailing each other links to websites and news articles about alternative buildings. We have looked at straw bale, wattle and daub, log cabins, cordwood, earthships….The one we keep coming back to us cob. For various reasons it speaks to us – the idea that anyone can build with cob, from young children to more mature people, it is not as physical a build as some other options. There is much scope for artistic freedom, cob is a material you can sculpt with, building both the external structure but also the internal features. It seems pretty forgiving – there are some basic rules from which you can’t deviate but after that once you understand it there is no need for full on technical engineering level skills. It is properly green – pretty much everything we need is already right here for us to use. It is low cost high labour which pretty much suits our budget and the large number of family, friends and volunteers who want to come and help out.

Finally there is something incredibly poetic about the idea of finding the best possible use ever for all that mud.

So, we’re plowing our way through a couple of books on all the grown up, proper stuff we need to understand. We’ve booked ourselves on a course to go and learn more of the really important stuff. We’ve been testing our soil, making mixtures up and measuring them for shrinkage, drying times, hardness once set and so on. We have been digging test holes in various places on the croft and doing lots and lots of getting our hands dirty.

The next step is to actually build something. Something small so that if it goes wrong we have only made a small mistake, but something useful so that we are investing our time wisely into both research and developing our croft. So we’re building a chicken house. We have a deadline of the cob course so that we can take along our practical experience to know where we need to learn the most.

A big decision was what to use for the roof – we don’t want to spend on materials for this and we have plenty of recycled galvanised metal sheets on the croft so they are the logical choice. We need to better understand how the roof will all work which is the current indoors research we are working on.

Meanwhile we gathered the sheets, laid them out and measured them as these are the dictator of the size and shape of our chicken house. That done we worked out the right location for the chicken house – close to where they currently are houses, near to where we sell from, close to a water source and somewhere on a slight slope where drainage will be easy to organise. We drew a set of plans and then measured and marked out the site.

The next step is to dig out the trench which will be the foundation. That is planned for this weekend – I’ll let you know how we get on.

3 thoughts on “Adventures in cob”