It’s been a soggy start to May along with plenty of winds. The Sheerwater boat which does runs from Arisaig on the mainland to the Small Isles during the summer should have started it’s twice weekly visits to Rum this week but both days it would have come have been wild weather. Our plastic has arrived to create new strawberry covers but it’s been too windy to be outside trying to wrangle plastic sheeting. Fortunately none of the broody birds have hatched any chicks yet although we are due both chicken and turkey chicks any day now.

Instead we’ve spent a lot of time indoors dashing out between showers, or sometimes just putting on waterproofs and braving the elements. Inspired by the bramble baskets I read some of my bush craft and countryside craft books to find out which materials can be harvested to craft with at this time of year and spent some time experimenting with reeds / rushes – an incredibly plentiful resource here. We have far fewer on Croft 3 these days thanks to regular cutting and grazing but we still have clumps in the wilder areas of the croft and a handy supply of very green and verdant ones inside the polytunnel. I cut some and made some cordage or twine with them. 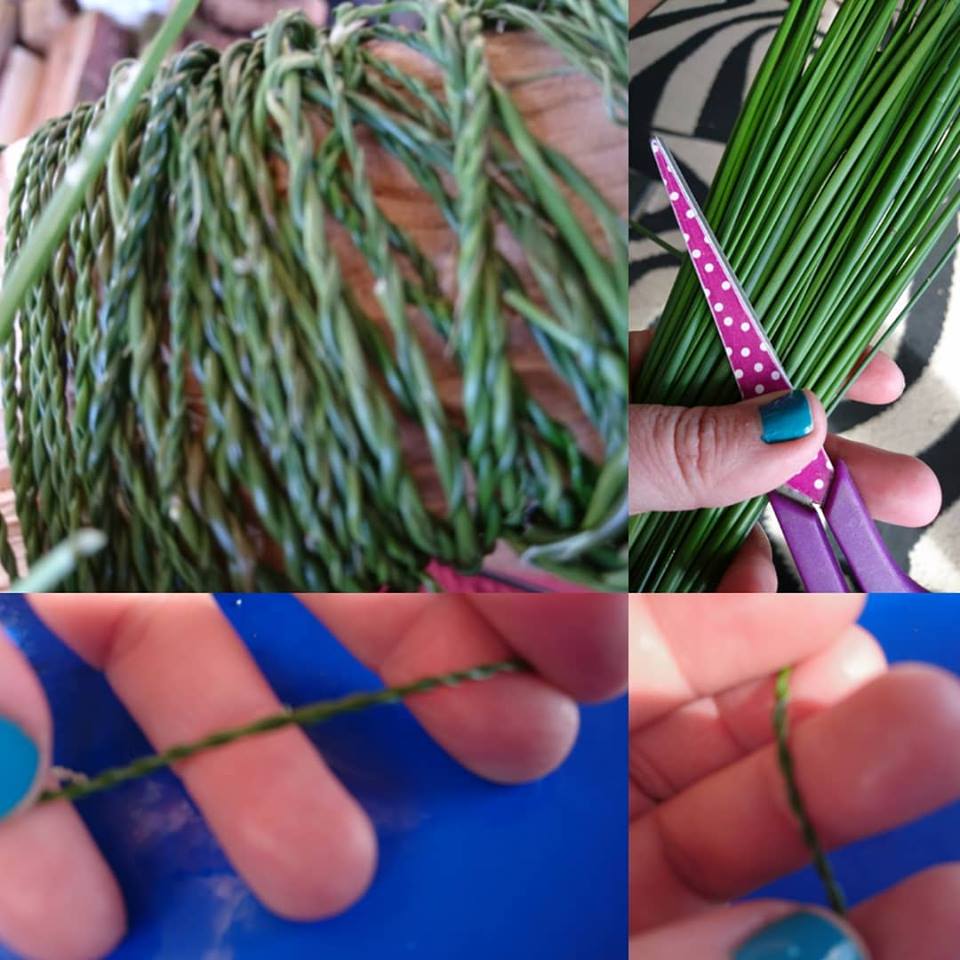 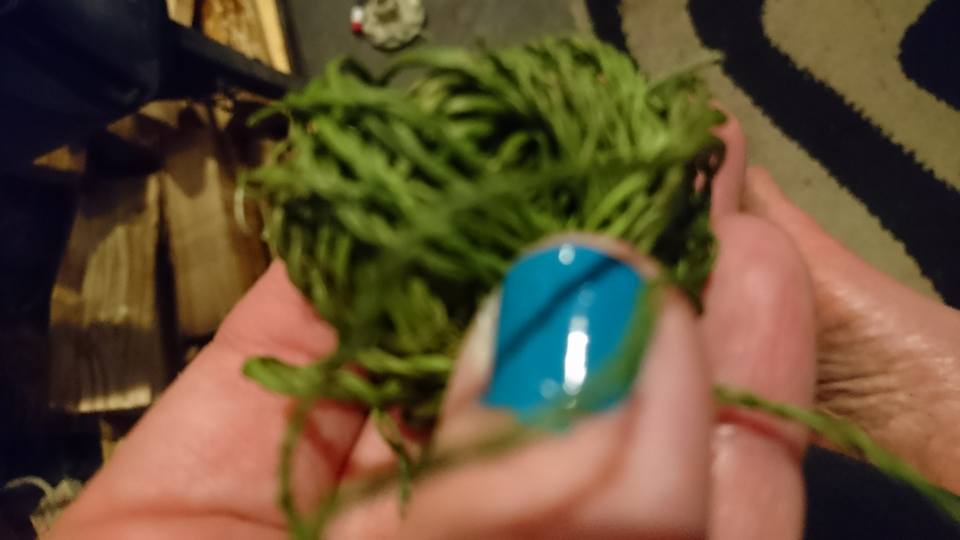 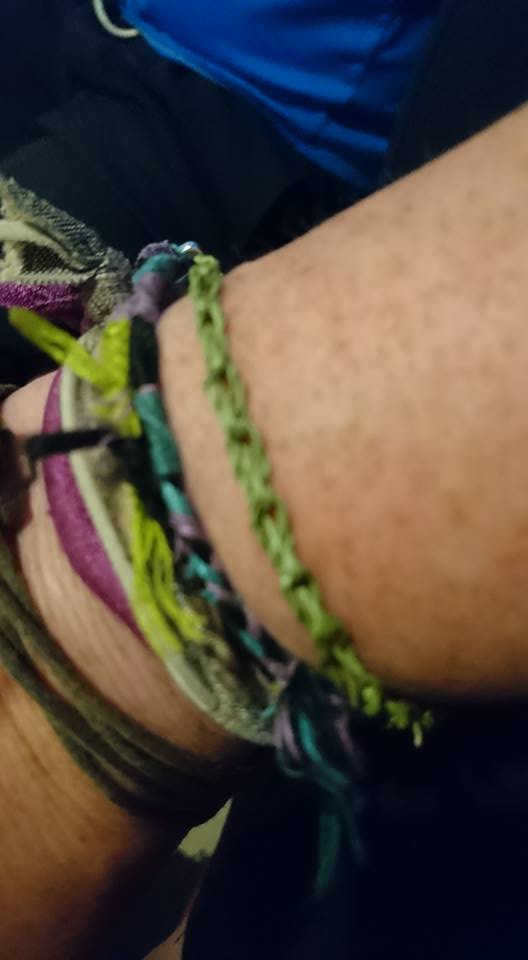 I have made a small bracelet with it to see how it fares with changing temperatures. So far it is holding up well and is still pretty strong.

Ady and I had a victorious afternoon of replacing a broken part on our chainsaw. Getting the part in the first place proved trickier than expected with our original source failing to get it to us after several weeks so we had to resort to an online purchase which finally arrived this week. In theory it should have been a straightforward like for like swap with just a couple of screws to remove the friendly looking casing to reveal the scarier innards of the machine but this also released a tightly wound spring coil which we then had to re-wind and re-insert. You tube helped with that – hurrah for the internet! But the final hurdle was something we couldn’t find help with online so after some feeling the fear and doing it anyway we worked out a theory and went with it. And we were right! Our greatest triumphs since we’ve been on Rum – and quite possibly in our whole lives – have been in having faith in ourselves and being up for trying something that feels right even though common sense (as in what everyone else might caution you to do!) tells you to not to incase you get it wrong. 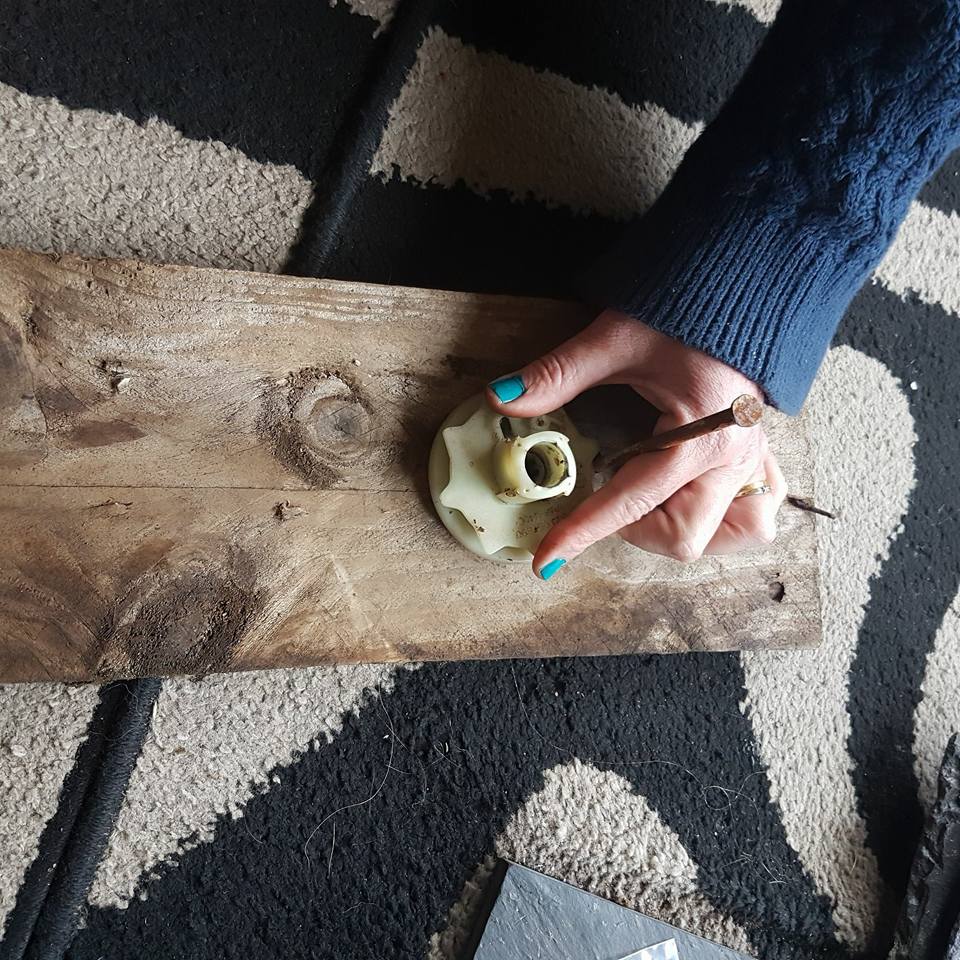 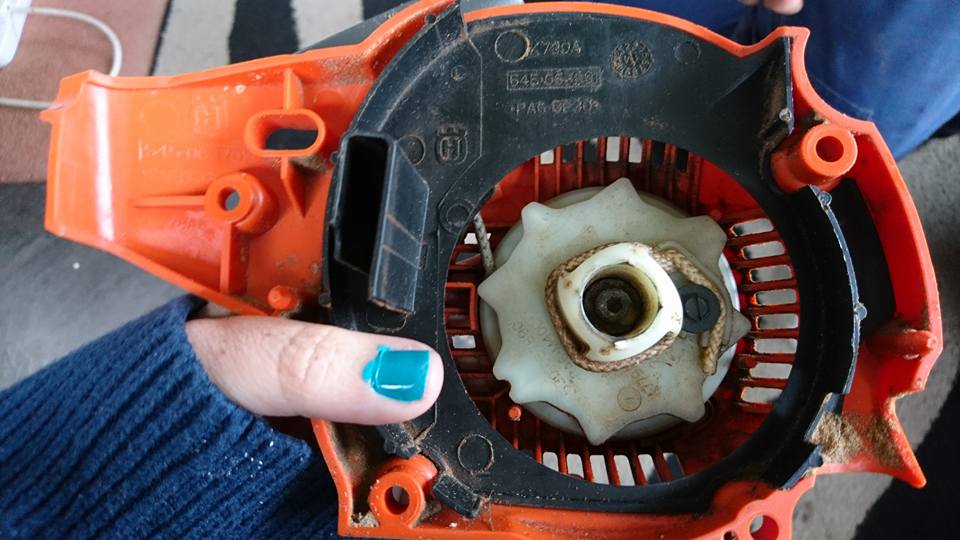 Half an hour afterwards I was not needing that jumper anymore as Ady had chopped up a load of firewood and we’ve been cosy ever since!

Continuing in the vein of lifelong learning Ady has followed in my footsteps as I followed in our teens and joined instagram – home of pretty pictures online. So there has been much talk of hashtags and @-ing people, which ties in rather nicely with some of what Davies and I have been learning of the impact of globalisation on individuals, culture and language development.  The north side nature trail on Rum borders three sides of our Croft and we recently put up some signs at the top of Croft 3 encouraging people to stop, look up, down and around, listen and pause giving some suggestions of things to look and listen out for. Today we added some seasonal tips such as listening out for the cuckoo (who we’ve started hearing again in the last week) and asking people to share their photos online. We also added a sign at the Shed for people to check in there on facebook or instagram. 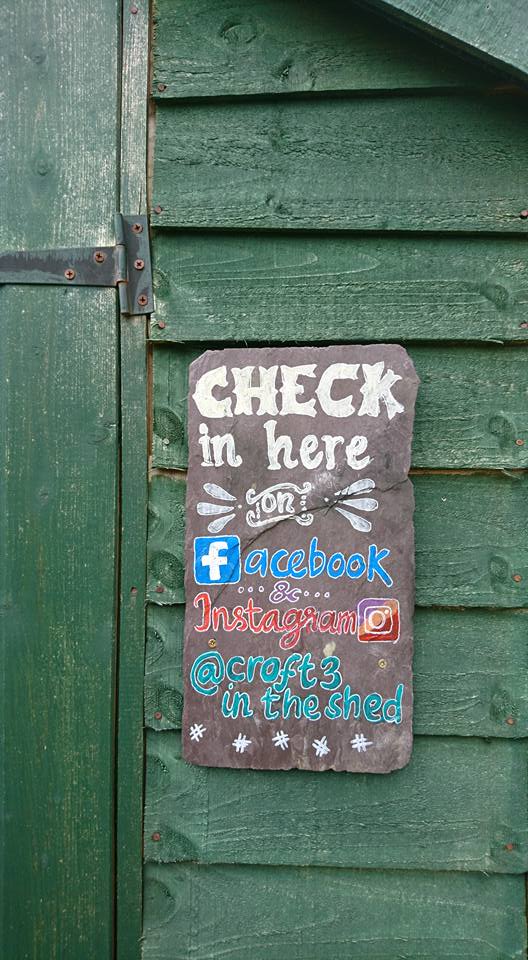 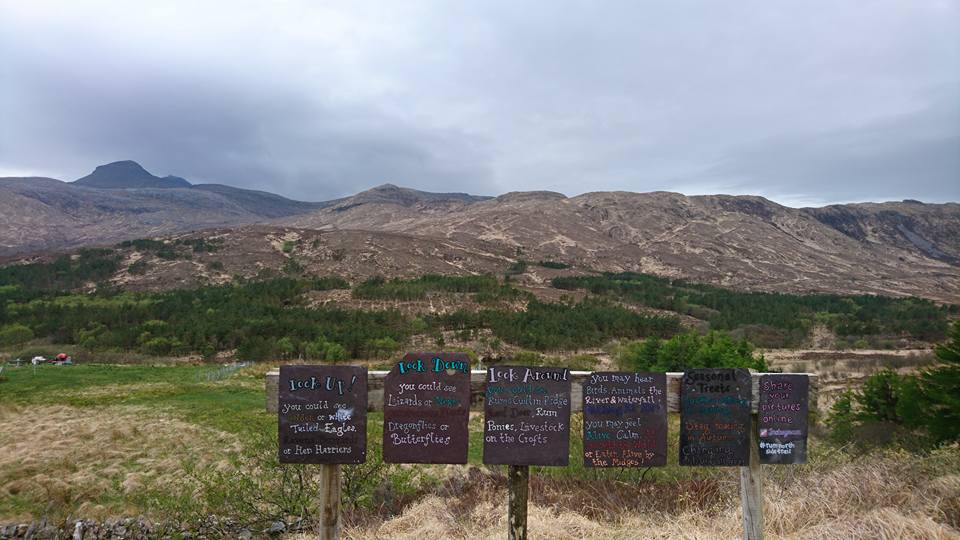 Sometimes though you just have to brave the rubbish weather. I remember when I was at primary school and we would have days when it was too rainy to go outside at playtime / lunchtime. A double bell would be rung instead of just one to signify we should stay in our classrooms. The teachers would still get to leg it to the staff room for their coffee fix and older kids would be sent to monitor the younger kids classrooms. The lack of running around outside fresh air time would kick in pretty quickly though with kids squirming in their chairs and being rowdy in class, unable to concentrate. Despite never having done ‘sitting down structured learning’ with Davies and Scarlett we would still sometimes get ‘wet play syndrome’ if we’d been indoors for too long so we’d don wellies and head off to splash in puddles and find raindrops on spider webs, or wait for the smallest break in the rain and get outside to smell the wet pavements and see how the colours changed from wet to dry and back again.

It’s not practical to work in heavy waterproof clothing here, we don’t have much room to dry wet clothes and when it’s as windy as it has been this week you can’t do much anyway outside without risk of things blowing away. But we still have to feed animals, collect eggs and pop down to the village to collect the post, fetch food supplies from the freezer or deliver eggs to the shop and so just as when Davies and Scarlett were little we have been deliberately slowing down and deciding if we are already soggy we may as well linger and enjoy the difference to the landscape that a downpour brings about. Rivers running faster and wider, the colour changed to dark and peaty as the water gathers debris from the land, the spring colours of the shrubs, trees and flowers in brighter relief against the low mist than the blue skies. 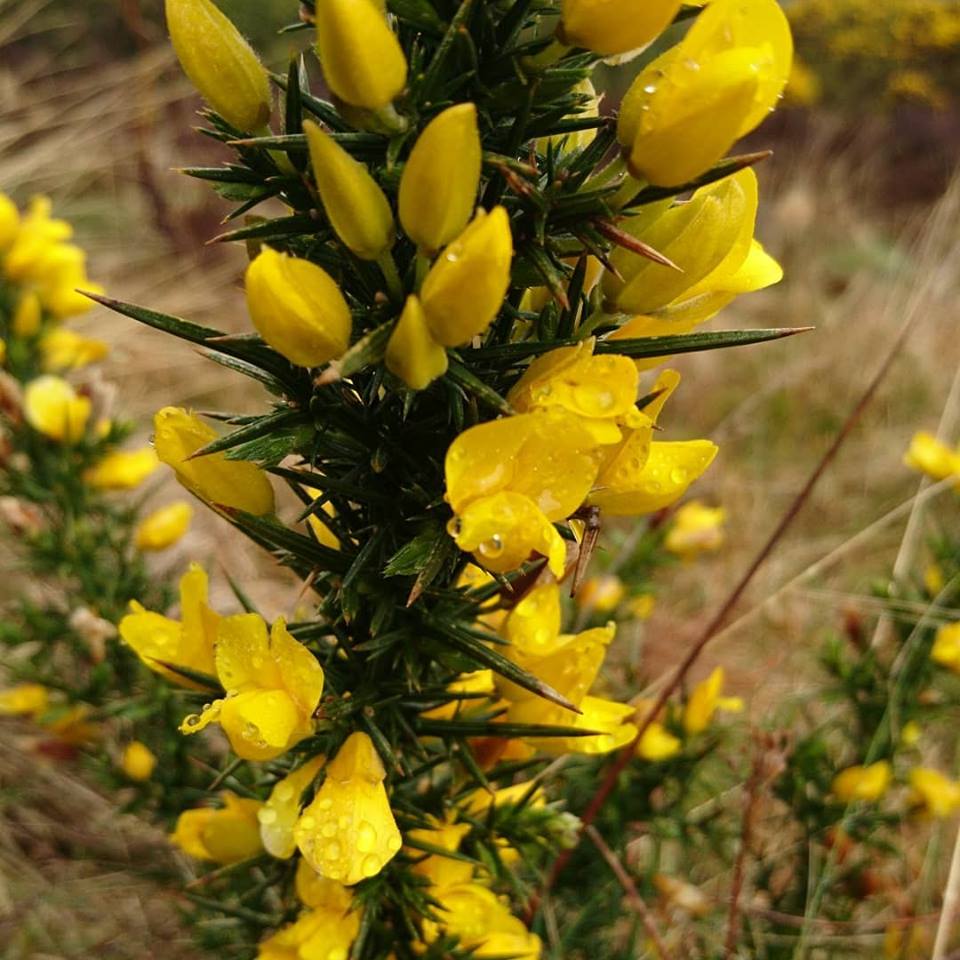 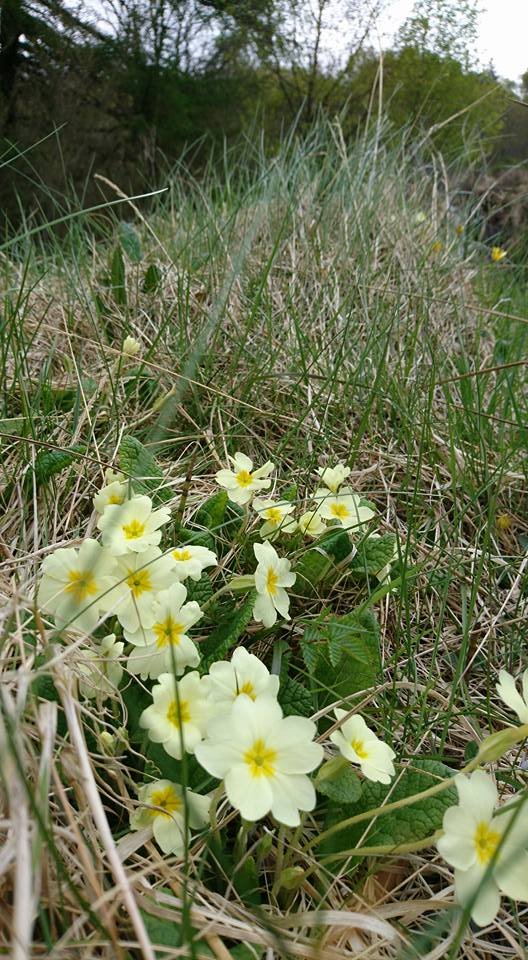 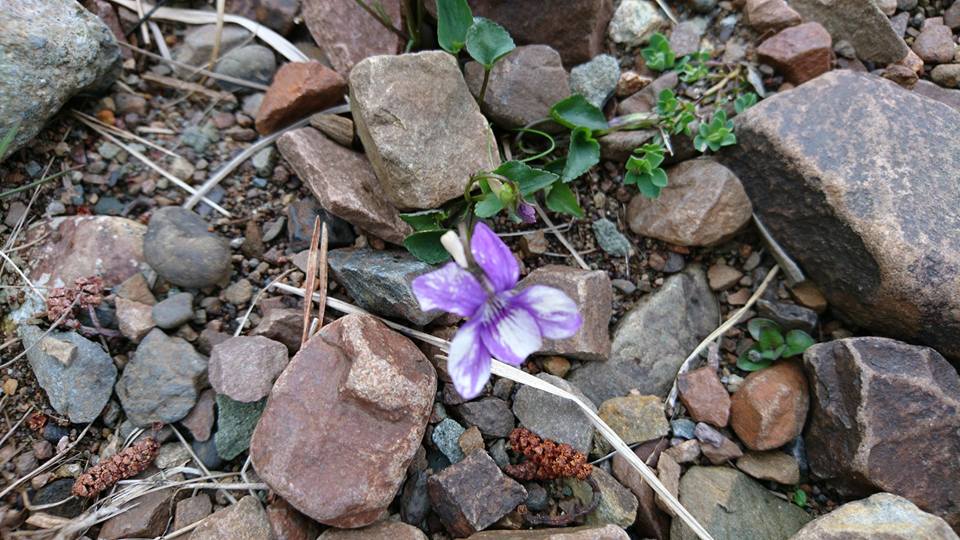 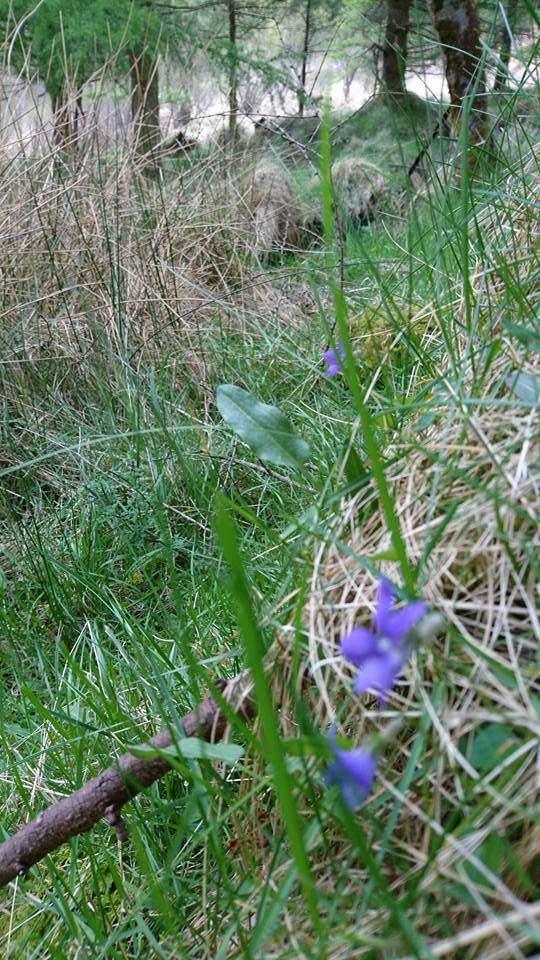 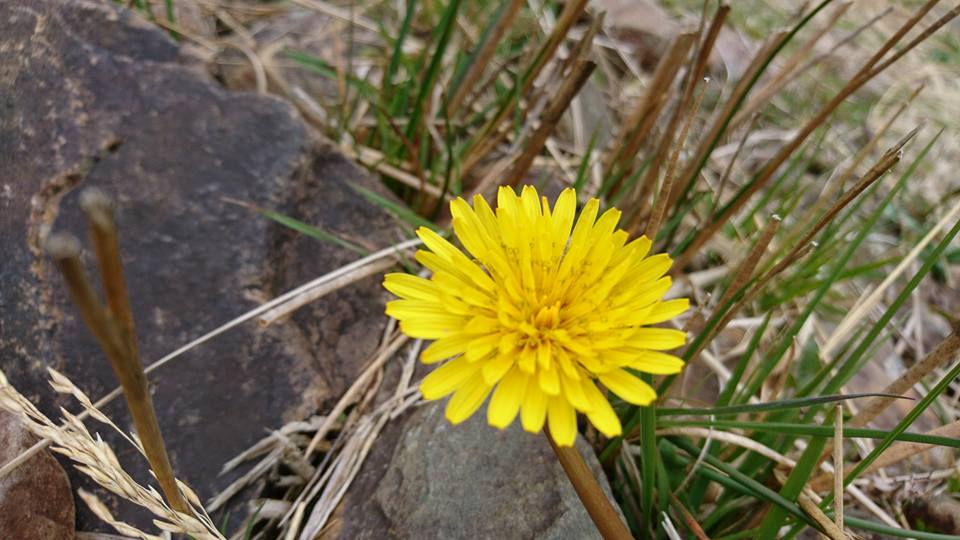 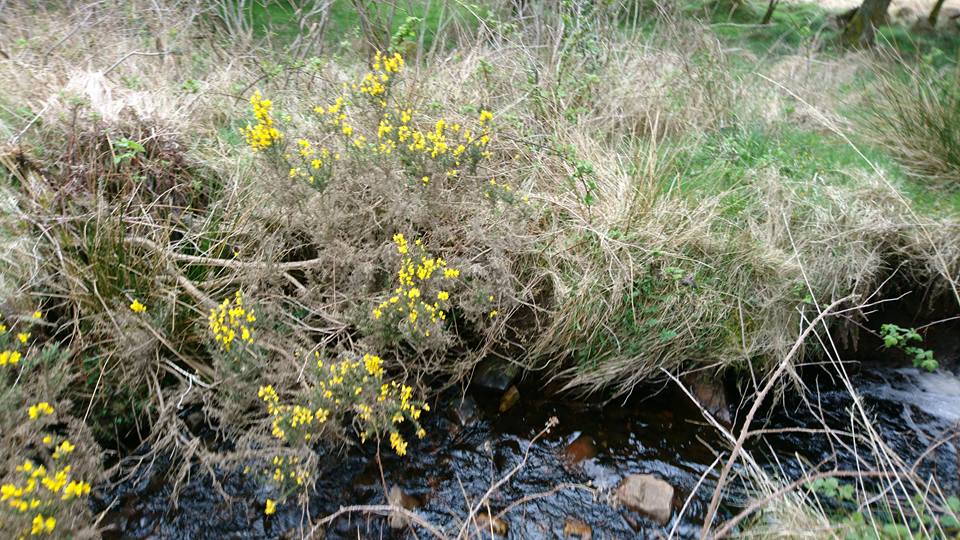 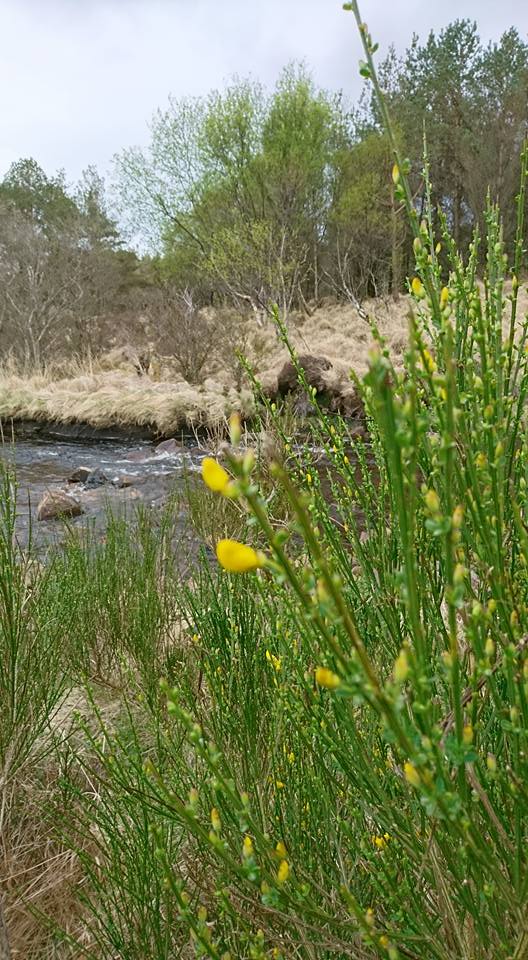 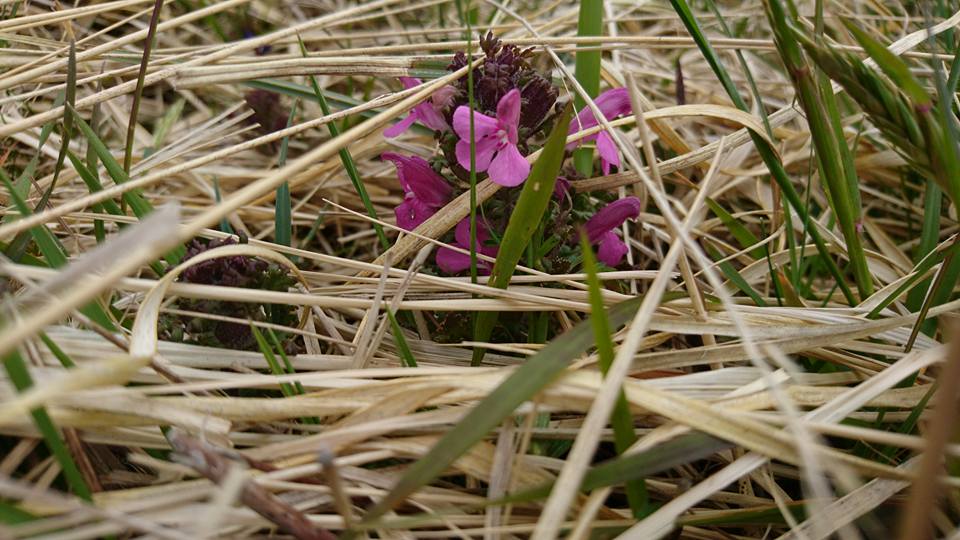 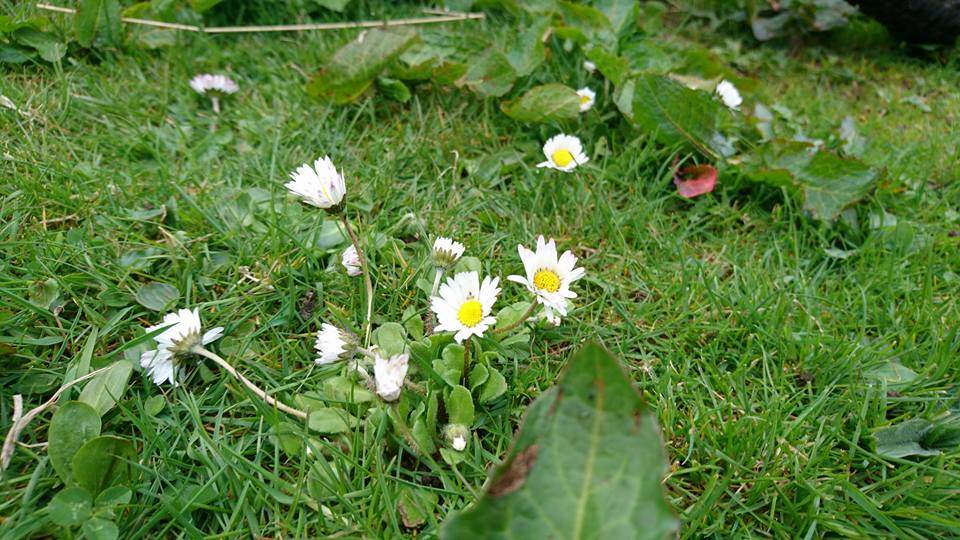 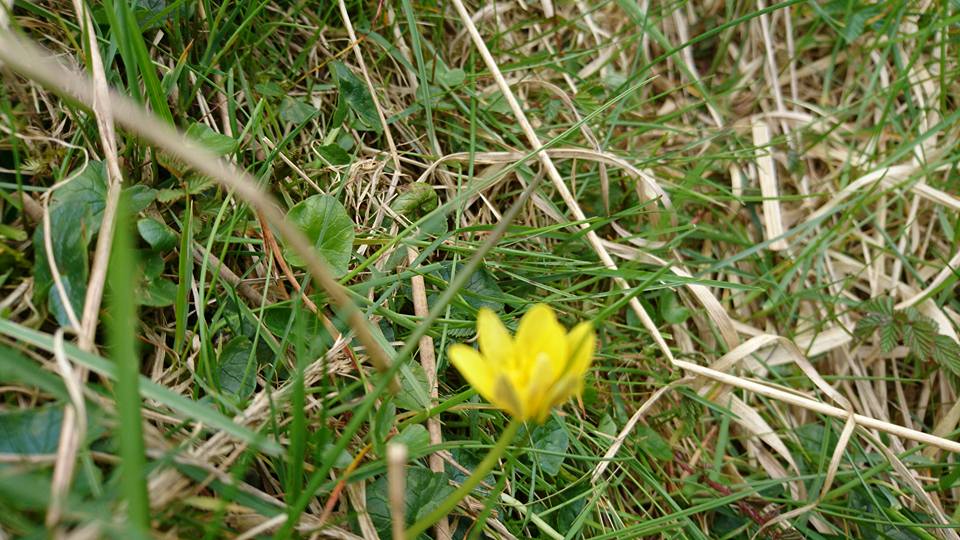 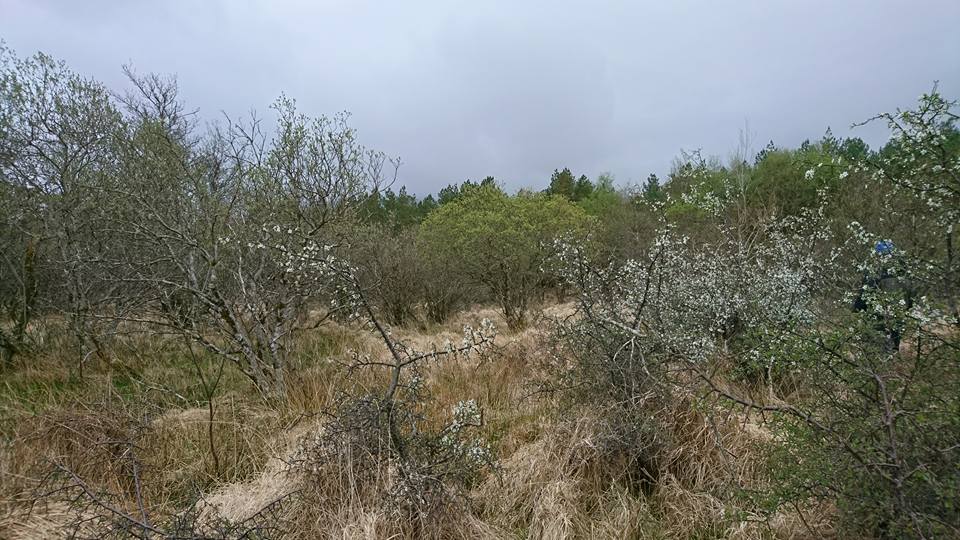 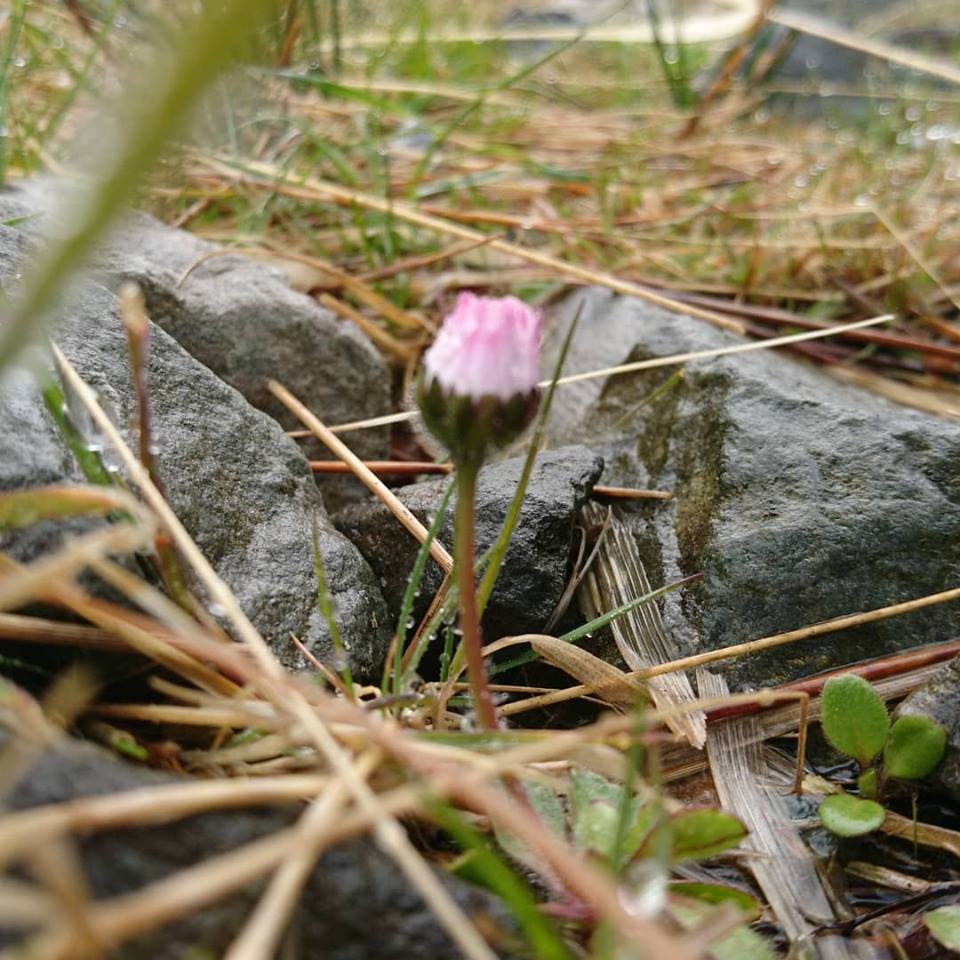 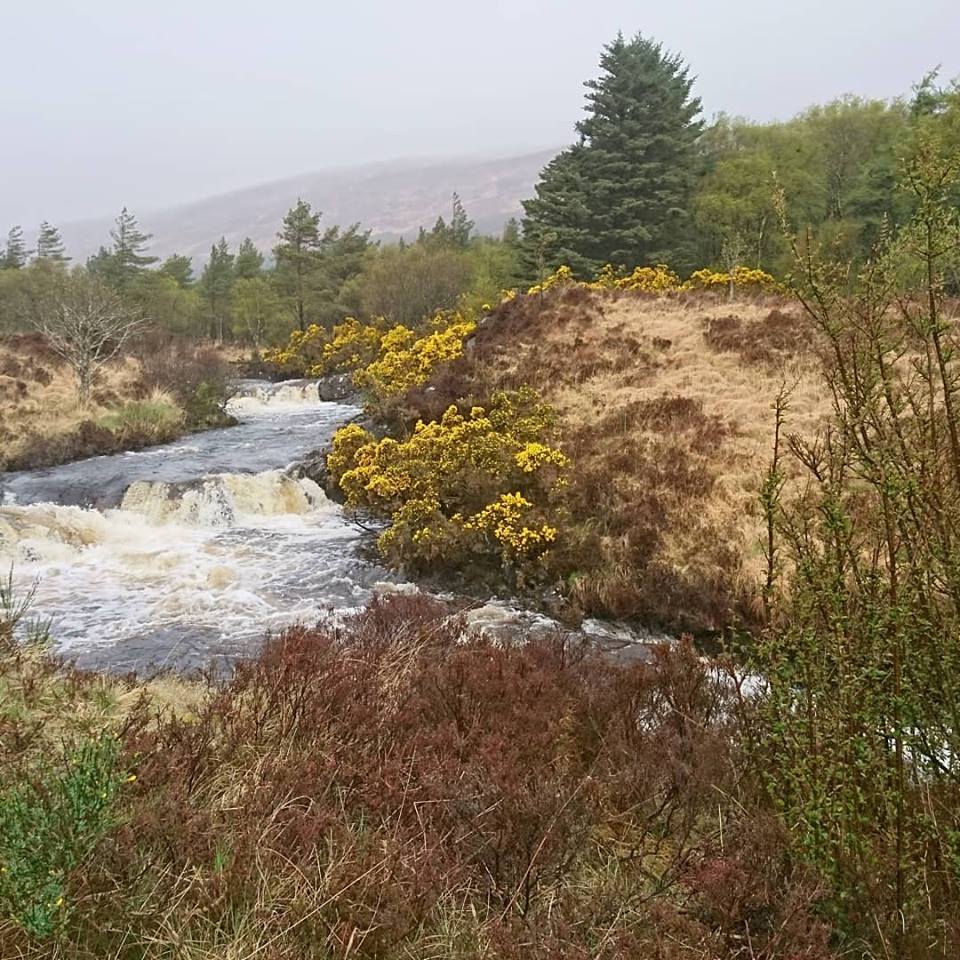 Beauty everywhere. I can’t deny a bit of sunshine would be nice now though!