It was, as all previous 20th April’s seem to have been a glorious sunny day, a smooth ferry crossing and that feeling of home-coming, the butterflies in my tummy as I caught my first glimpse of Rum across the sea from the mainland as the train pulled into Mallaig and then Rum looming ever larger from the ferry as we approached.

Four years. Four years worth of celebrations, challenges, friendships, adventures and excitements. Four winters worth of winds, rain and mud. Four springs worth of cuckoos, primroses and hatching baby birds, four summers worth of midges, dolphin and whale spotting trips, four autumns of red deer roaring and rutting, the hills turning purple and bramble picking. Four tourist seasons of visitors coming to the island, four years of the endless daylight hours of summer and four years of the short dark days of winter. Four years of That View, of starry, starry nights and Northern Lights, of sunsets and eagles soaring.

In these four years Davies and Scarlett have grown from children to teenagers – aged just 9 and 11 when we arrived here they are now 13 and 15, formative years spent living as islanders. Ady and I have celebrated ‘big’ birthdays here turning 40 and 50.

I have lost count of the visitors we have had here staying with us – family, friends, volunteers. Some from our old lives, some we have only met because we’re here.

We have learned, so, so much since we arrived here. New practical skills, new ways of approaching things, new ideas and philosophies. We have learnt about Rum, about our own way of life, about people, about ourselves. We have become immersed in nature, in wilderness, in the seasons, the weather, the landscape, the wildlife, the elements. We have tamed and conquered, we have been put back in our place.

We have been on TV, on radio, written about in newspapers, in magazines and online. We have reached people all over the world with our story and people have come to Rum just to meet us.

In four years we have changed our bare field to a home, a business, a working croft. We have harnessed water, solar and wind, laid paths, built infrastructure, animal shelters, wood stores, fruit cages, walled garden of raised beds, polytunnel, bike shed. We dragged a caravan down hills, across river and up the croft. We have grown food, bred and reared livestock, killed and processed meat.

We have set up a business, with many different branches, created a brand, marketed, advertised, found our niche and built an outlet. We are now a destination with many visitors coming just to buy from our shop.

We have volunteered and given our time, participated and taken part, helped move things forward, done our bit for community development. We are part of Rum and it’s story. We have seen people come and go.

It’s been an amazing four years. We are so proud of all we have achieved so far. Life is a short and precious thing with many unexpected plot twists around each corner. We set out to make the most of every opportunity and I feel we have made every little bit of these last four years count. Who knows what the next four years may bring… 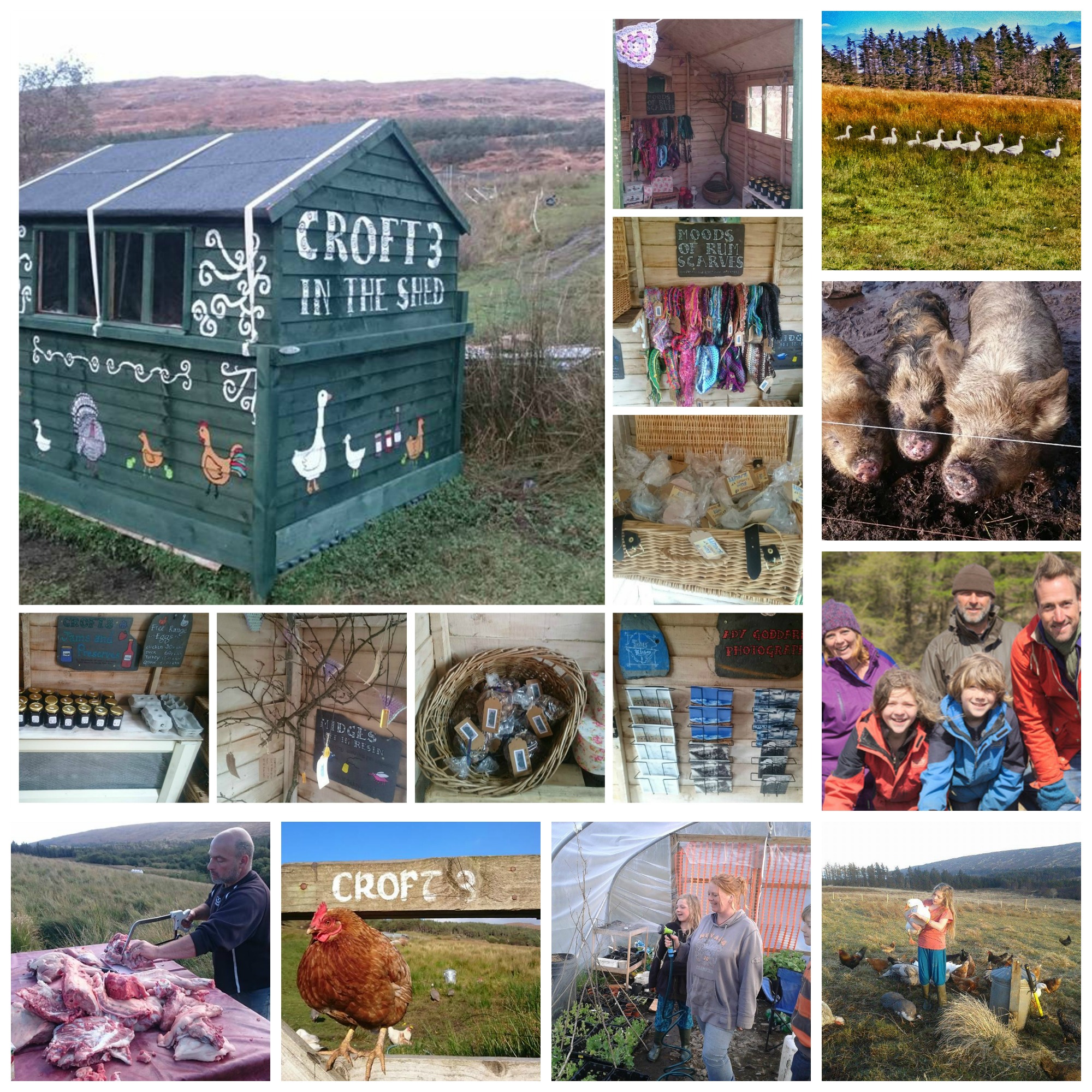 Reading back the blog posts just before we arrived here four years ago I found this poem which had inspired me. It’s inspired me all over again now.

I read of a man who stood to speak,
At the funeral of a Friend.
He referred to the dates on this tombstone,
From beginning ….to the end.
He noted that first, came his date of birth,
And spoke the following tears.
But he said what mattered most of all,
Was the dash in between those years.
For the dash represents,
All the time he spent alive on earth.
And how only those who loved him,
Know what that little line is worth.
For it matters not, how much we own,
The cars, the house, the cash,
What matters most is how we live and love,
And how we spend our dash …
So think about this long and hard.
Are there things you’d like to change?
For you never know how much time is left,
That can still be rearranged.
If we could just slow down enough,
To consider what is true and real.
And always try to understand,
The way other people feel.
And be less quick to anger,
And show appreciation more,
And love the people in our lives,
Like we’ve never loved before.
If we treat each other with respect,
And more often wear a smile …
Remembering that this special dash,
Might only last a little while.
So when your eulogy is being read,
With your life’s actions to rehash
Would you be proud of the things they say
And how your spent your dash?

One thought on “A Fourth Rumiversary”