It’s been a busy week (again).

Many late nights, some filled with natural wonders such as the northern lights, another attending a pre-eclipse talk from one of our residents who just happens to be a bit of an eclipse chaser, another couple with socialising, eating and drinking (in the case of some of us rather too much drinking…)
We have friends visiting, not staying with us but down in the village and generous enough to host us for dinner which is always a luxury.

It’s felt like the start of the season too, with the first tourists coming off the ferry, roaming the island with stuffed full rucksacks, waterproofs and sturdy boots, cycling and making us jump as we realise the person in the distance walking towards us is not an islander as we don’t recognise their walk. On Tuesday we had visits from local tourism and accommodation providers for the annual Familiarisation Visits where we invite folk over on a chartered boat to learn about Rum, our Ranger Service, our local facilities, produce, foods, crafts and attractions so that they can better inform their customers about visiting Rum. Ady and I attended to chat about Rum Venison, Croft 3 produce and general Rum stuff.

On Wednesday another charter boat full of folk arrived this time those interested in tendering for the stag cull for the next two years. So there were plenty of people dressed in camo print being driven around the island in landrovers.

On the croft we finished the Big Pig Move of 2015 and both Tom & Barbara are happily settled in with Barbara due to farrow in the next week or so and looking very pregnant it is great to have them now in their next patch of croft. Our big news though, and the dominating project of the week is a flushing loo in the caravan! It is still a compost loo with elements of dealing with and processing the waste afterwards, with the solids being captured below the caravan in a basket inside a tank, ready to be deposited in a larger tank with worms to aid the composting process and the liquids draining away and processed elsewhere. This is a real experimental system based on an article we read on the concept and having bartered and gathered the various component parts to put it together for zero cost. So far so good and it is not only a real improvement in our current accommodation and will ease the workload in dealing with waste weekly it also allows us to learn more about options for the cob project waste solutions.

I have done a couple of post office shifts, Ady has done a hostel shift, we had an animal feed delivery, have processed firewood, done some crafting and Davies and Scarlett dug out their bikes and have spent hours cycling, walking and playing on the beach.

We have had our first duck and goose eggs of the season which leads us to have a sense of urgency for next weeks projects of bird housing to enclose them overnight until they lay during the summer months for ease of egg collection.

And finally it was the solar eclipse for which we were fortunate to have excellent visibility, a splendid view from our croft and a whole crowd of good friends to share it with. We drank tea, watched as the world went dark and then bright again, observed the spooky effect on all the birds and the sun looking like a crescent moon. 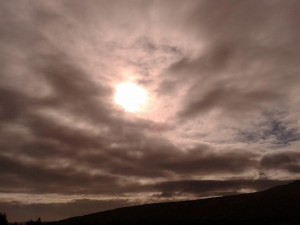 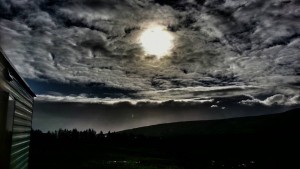 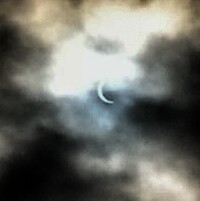 2 thoughts on “A cosmic week”