If necessity is the mother of invention then collecting crap is the father of mad ideas!

The loss of the community polytunnel this winter really set us back – we had made full use of that the last two years getting a head start on seedlings using it as a greenhouse, putting in a permanent patch of strawberries which thrive under plastic and growing crops such as tomatoes, chillies and peppers which you can only really grow under glass or plastic in this country and extending the growing season with things like salad and herbs. Not having that space this year, particularly when spring has been such a long time coming was a real blow.

Classic Rum politics and the slow decision making process has meant that a proper decision about quite what to do about the polytunnel next is yet to be made. Infact we have slowed that up ourselves as when we went to measure the area to get the plastic ordered we realised that there has been more damage sustained in 3 winters of high winds than just the plastic and the whole frame is shaky and bent. It probably needs to be dug out and re-sited somewhere more suitable in a different orientation than north south bracing a steep hill…

We have been pondering ways to make cold frames, a mini greenhouse or something similar. I had even started drawing up plans for a geodesic dome as we had the scavenged plastic from the ill fated polytunnel, ripped in many places, stretched, damaged and irregular in shape. Then we went to Harris beach for Ady’s birthday and a very long stretch of black plastic pipe that we had been eyeing up for about 2 years but never worked out how to get back to the croft was finally retrieved by Ady’s genius idea to take a saw with us and cut it into sections short enough to put on the car roof.

Ady spent ages working out how to construct a polytunnel using the tube as the basis with several failed attempts, lots of swearing and plenty of nails, screws and scrap wood being used but finally he had a frame he was happy with and stood up to the standard Croft 3 test of ‘can I lean really hard on it with all my weight and wobble it without it falling over’ – this tried and tested method has been developed over several years of bitter experience and thinking ‘it’ll be fine’ about things which have proved very much not fine in the high winds we get here. Using it has ensured our pig pen, bird pen and cob pizza oven base have stood the test of time though so it is now our standard requirement for all things remotely permanent or structural. 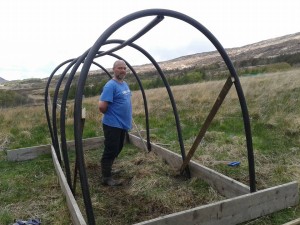 Also in our usual manner the frame has now stood for several weeks waiting for it to not be windy or raining or us to be distracted by other things. Ady did try and cover it on his own in a sort of patchwork style with various bits of plastic but it really didn’t work. So I waded in (in my customary manner) and decreed that it needed to be one single expanse of plastic. We didn’t have one single piece of plastic large enough but we selected the largest and closed off one panel with wood. We’ll also have a few small panels which will need to be separate to the main plastic. Which is fine. So today we finally got to it, armed with screws, bits and pieces of wood, the drill, some polytunnel repair tape and some kicking tunes to listen to and we made this happen: 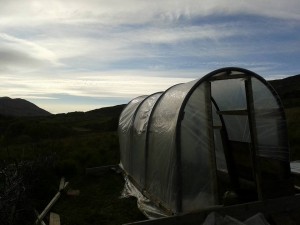 Tomorrow we’ll fill in the gaps – two sections will need plastic covered panels, one area needs more wood and we need to fashion something to cover the doorway. Then we’ll create a U shaped raised bed around the sides with a path down the middle. We’ll plant some permanent crops, like those strawberries transplanted from the community polytunnel once they have finished fruiting and use the rest of the beds for crop rotation. We’ll put in shelving to start off seeds to transplant into the raised beds and herb spiral each year. Hopefully by the end of the month it will all be finished and ready to make the most of this year’s late start to the season.

Scavenged waste materials, found and reclaimned resources, repurposed and recycled stuff. All put to good use here on Croft 3. Further photos and updates to follow as progress is made.

One thought on “A classic Croft 3 project”