It’s been a really busy week all round here. Bramble picking and jam making aplenty – Ady and I have both done plenty of picking, Scarlett and I have both done plenty of making. If I am the Bramble Mogul (as coined by the presenter when I was on BBC Radio Scotland recently) then Scarlett is the Jamming Queen. I reckon we have a week or so left of brambles but we are on track to hit the 200 jars made target.

We experimented with both wet and dry cures for the meat from the pig we killed at the start of the week. The dry cure was to make bacon and was our most successful yet – we ate it all yesterday lunchtime in bacon sandwiches. The wet cure was in brine – sugar and salt solution with added herbs and spices, soaked for five days. We have two large hams to go in the freezer for Christmastime and we boiled then glazed and roasted the two smaller cuts for dinner tonight. Delicious!

Ady had three days of ghillie-ing this week – out and about leading a Rum pony over hills and moorland. He has really enjoyed it despite the long days, heavy lifting and rough terrain. I have been doing lots of Post Office shifts, had a directors meeting, a very long phone chat with a TV and radio researcher, compiled, edited and sent out our residents newsletter, written a couple of chapters for a book I am co-authoring, spent an afternoon crafting and chatting with a friend.

Davies and Scarlett had their first solo mainland adventure. Heading off on the ferry all alone, meeting friends at the other end, spending two nights away from Rum, including a 24 hour challenge to live outside the house with their friends in a tipi cooking all their own food. We missed them lots, Bonnie was particularly confused as to why various of the four of us keep disappearing these last couple of weeks.

I have been fighting a cold which I bought back from the mainland, but despite all the busyness I have managed to eat well, drink plenty of fluids and ensure I’ve been in bed early and it seems to have run it’s course and left me fairly quickly.

Today we started on our latest Croft 3 project, building a little shop to go at the croft gate to sell our crafts and produce. We have done really well with our little honesty larder fridge selling eggs and jam but with the children and Ady also starting to come up with arts and crafts along with my midges in resin, dried flowers and Moods of Rum scarves we felt the time had come to set up a place to sell our Croft 3 items all in one space. We would normally come up with something more ‘us’ than an off the shelf shed but after tossing ideas about for a bit we decided it was the quickest way to get started and we could put our own stamp on it. That started rather earlier than we expected when we realised just how flimsy the floor of the shed was and set about creating reinforcements to the floor panels. We have also constructed using heavier duty screws, many more than suggested and created a cradle to go around three sides of the shed to protect from the wind and give us something to anchor roof tie downs on to. All of this meant it too rather longer than we’d hoped and we still have the roof to felt tomorrow but within the next couple of weeks hopefully we’ll be past the construction phase and onto decoration and Croft 3-ising it. 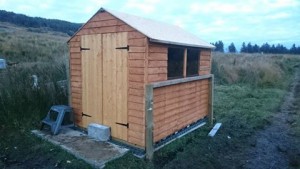