When we went off WWOOFing we took with us a bottle of fizz. We had a party just before we left Sussex and as is the norm with parties you get left with random bottles of alcohol afterwards. We had a few random bottles of post party drink plus the contents of our own drinks cabinet (we didn’t actually ever have a drinks cabinet as we were not really a couple from a 1970s sitcom but we still had a collection of drinks that seemed to kick around for years). Most of that eclectic collection got drunk along the way while we were on the road. Medicinal purposes, desperation, decluttering… the bottle that made it all the way round with us though was this bottle of fizz. I don’t actually know how we came by it but it lived in one of the bench seats and I think we planned to either have some celebratory occasion and break it open or hit a point whereby we were needing to drown our sorrows and call an end to the whole silly idea and toast going home again.

When we arrived back in Sussex in November 2011 and parked Willow on my parents driveway we brought the bottle in with us and shared it with them. It turned out that although we could have just left the bottle with them at their house along with lots of our other stuff it was somehow appropriate that it traveled round the country with us and came along for the ride. 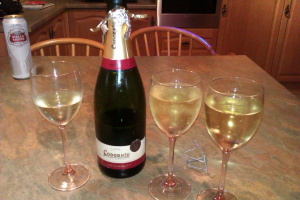 If it taught me anything it was that sometimes the time to celebrate is the end of the adventure. I think our WWOOFing was just that, a finite adventure with a clear conclusion. It was right that that bottle of fizz helped us celebrate the completion of that period. A safe return to family and friends, Willow making it all the way around, us having set out to achieve all our many objectives and returning victorious.

One of the great highlights (and there are many) of 2011 was meeting Jill and Johnny, some amazing friends who we crossed paths with by chance but returned to spend time with in Glastonbury on several occasions. These are people we feel almost destined to have met, to have in our lives. When we pulled away from them the last time (and we visited them in all of the different vehicles we were driving in the 18 months or so they knew us including Willow, my old Sharan and the Pajero back when it was capable of driving on roads!) it was with a bottle of fizz, a gift from them to us.

We planned to crack it open when we arrived on Rum. But just getting here didn’t feel like quite enough of an achievement. So we deferred it until we were actually in the static, except of course the static arrival didn’t quite go as planned. So maybe when we finally got the static on the croft? That day was amazing, fantastic, wonderful. It was also the 19th anniversary of Ady and I being a couple. It felt like it might have been the right day to crack open the fizz, except we were exhausted that day, utterly overwhelmed with emotion and just desperate to have dinner and crawl into bed finally on the croft. It would not have done the fizz justice to open it and not savour it and all it represents.

We had Christmas, New Year, my birthday and on each occasion I have pulled the bottle out with thoughts of opening it. None have felt right so it remains intact, ready for the perfect moment. In my head I thought perhaps it would be today – the celebration of us being on Rum for a year. We’ve toasted that – Ady and I had a beer with our barbecued sausages at lunchtime at the community beach clean. We had planned a curry, a few drinks with friends down at the bar and then home to maybe crack open that bottle. But the weather is wild and the ferry was not running to schedule, the shop had no chicken for a curry and Barbara Pig is birthing. So Ady drove around meeting boats and chasing our deliveries, I sat in the mud with Barbara eventually hitting a point where I had to either decide to miss dinner and sit in the mud with her all night or come in, have a shower, get into warm, dry clothes and eat dinner conceding that actually nature will have a far better voice for what Barbara should do next that me.

So a very late dinner, hopes that Barbara will do just fine and high levels of exhaustion all round after a full day of beach cleaning mean that fizz remains full and waiting for the right moment still…