As so often seems to be the way we had a rather wobbly start to our current host. We had arranged a three week stay – our only hosting longer than two weeks – when the host replied to say we could come for a week or two, but if we came for three weeks she had a local friend who could teach us some butchery. That was too good an offer to turn down so we went for 3 weeks and booked dates.

The hosts we are staying with in Zone one were booked and arranged way back in August last year so I am contacting them all by email a couple of weeks before we arrive to confirm the hosting, give a mobile phone number for contact and arrange an arrival time. The email to this host bounced back as undeliverable so I rang to confirm instead and after several minutes of confusion with the host not having a clue who I was or why I was ringing she suddenly realised she had totally forgotten having booked us and was now going to be away on holiday for the bulk of our 3 week stay! She seemed to think this was a bonus rather than a cause for concern though and as we’d have nearly a week with her before she went we decided this should be enough time for her to hand over the reins to us and show us everything we’d need to know before she went.

When we arrived in the village we couldn’t find the farm anywhere and when I tried ringing to get directions the answerphone said it was full and couldn’t take any more messages which was slightly alarming. In the end we pulled over and knocked on someone’s door and they were able to direct us to the farm – which has had it’s name changed so would always have been rather difficult to find…

The host was not there but the builder working on the house was able to direct us to park up (the van was really, *really* struggling with the country roads and steep hills and narrow bridges so in dire need of turning the engine off to cool down) and wait. The host did arrive within about 15 minutes, told us plans had changed and we were now to be WWOOFing for the local friends who could teach us butchery instead, directed us to follow her and shot off in her car. Poor Willow took quite a bit of coaxing to start up again and cope with further hills and we were questionning the wisdom of the whole situation too, particularly when we pulled onto the very wobbly driveway, a cupboard in the van flew open and loads of stuff rained down on the kids.

But, as it happens it has all panned out pretty well so far… we’re only a week in with two more weeks to go and we have been working some crazily long hours with the promise / threat of further long hours to come in the next two weeks. But we have learnt so, so much. We have been to the abbatoir and watched pigs being slaughtered, helped with getting chickens and turkeys from running around the yard (I don’t recall a funnier sight than the full body slam Ady managed in pursuit of a cockerel) to oven ready birds including plucking, removing heads and legs. We have helped to herd sheep, caught lambs and cows to take to the abbatoir, fed pigs, chickens, ducks, turkeys, calves, made sausages, minced meat, assembled kebabs and marinated ribs, baked pies and pasties, packaged and labelled meat, set up market stalls and packed them up again, sold products at markets, helped get the campsite ready, helped put up a toilet and shower block and take down a fence, assisted with injecting pigs and lambs with medicines, moved sheep from field to barn to different field and loads, loads more. 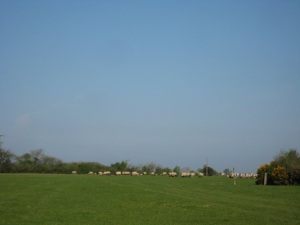 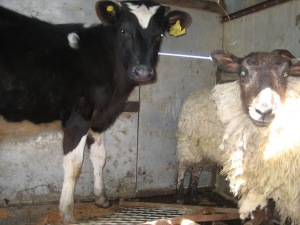 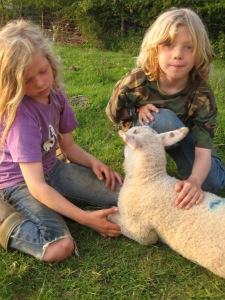 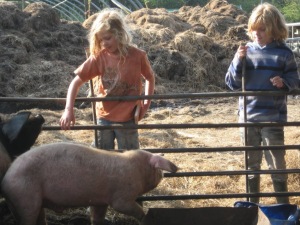 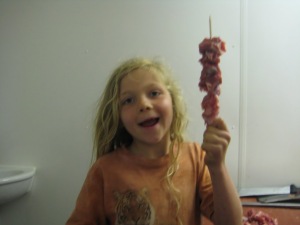 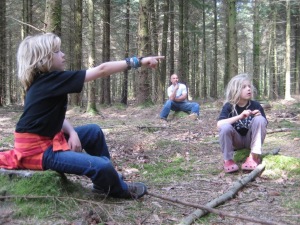 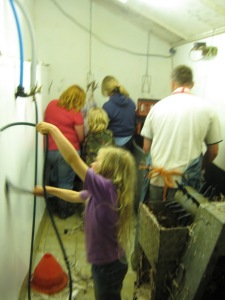 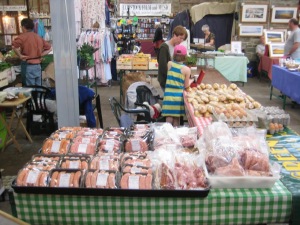 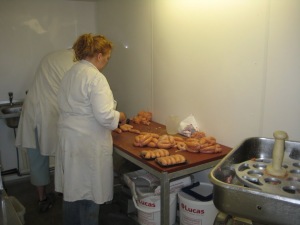 It’s been quite some week!
Dragon:
Bad: It’s been quite sad seeing some poorly chickens – several have been caught by a dog and a couple more are not well.
Good: I think I have learnt lots here, probably more than at any other host.
Learnt: How to make sausages.
Star:

Bad: I found it sad watching animals being slaughtered.

Good: I really enjoyed herding the sheep, it was lots of fun and I liked cuddling lambs.
Learnt: How to make sausages.
Ady:

Bad: The hours the hosts here work are really long, they definitely work longer and harder here than anywhere else we’ve stayed. It’s been quite eye opening how much of a slog it could be.

Good: I’m enjoying the ‘in at the deep end’ approach here of being asked to do a task which I would have thought was beyond me and managing it.
Learnt: How to age a sheep by it’s teeth, another method of turning a sheep, some countryside ways of managing livestock that I had not previously thought about.
Nic:

Bad: This place is not great for the four of us as a family. We are rarely working together, which although means we are learning different things we are able to share with each other at the end of each day does mean we are not getting much quality time together. Dragon and Star are not at their best in this environment and are missing the contact, chatting and being alongside us they are used to. We’ve talked it through and all of us are happy enough with the compromises for the learning opportunities but it is a definite downside of being here.

Good: The diverse and huge range of things we are learning. I am adding to my list of plans for our own ideal lifestyle with loads of the things we are learning here. I like the combination of all meals in the house and sleeping in the van too which we have here as it gives us our own space to retreat to and be just the four of us.
Learnt: Loads! I think my chief learnt here is about Farmers Markets though. They do four or five a week here, selling their meat produce and eggs, swapping and bartering with other stall holders for produce such as bread, preserves, vegetables, cakes and then bringing home any unsold meat to turn into pies and pasties for the next market. I have been clinging to an ideal of self sufficicency but actually I can see how one really good Farmers Market a week could bring in money, be a base for bartering to swap for the produce we don’t produce ourselves and negate the need for supermarkets and be a shop front to make contacts for local people who want our produce and may be interested in deliveries or collecting direct from us.

5 thoughts on “bring on the animals!”