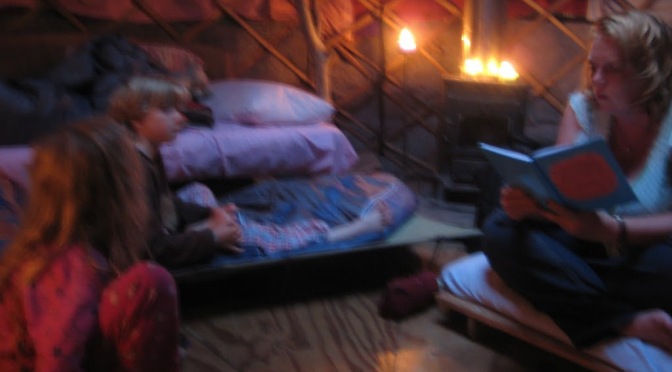 We have just finished a two week stay at a community in County Durham. A 15 acre area of woodland, dwellings and organic growing space. It is home to a small community made up of two families – both with two adults and two children. The children are all boys – aged 4, 4, 9 and 10, and three out of the four of them are Home Educated so Dragon and Star fitted right in.

They have been on the land for nearly ten years and started their time there in yurts and geodomes while building their current dwelling – a straw bale, two storey house. They have now outgrown that home and a second house – a fantastic three storey home, timber framed with straw bale infill, clay render and cob mix covered with a lime render outer layer is close to completion. Power is by way of a wind turbine, solar panels and bottle gas for cooking along with wood burning stoves. Water is harvested rainwater for everything other than drinking water which is brought onto site although we learnt on the day we left that tests on the water in their well has been cleared as fine for human consumption so they are now totally self sufficient in water.

There is a small flock of sheep, who graze and are sometimes eaten or fleeces used and a larger flock of chickens, for eggs and meat. The main use of the land though is the veg box scheme run by the community, which has a round of some 40 plus organic veg bags being delivered each week to the local area. Around 80% of the veg is grown on site – more during peak season and many of the customers also take eggs with their veg.

We stayed in the yurt while we were there Woofing – a new experience for us and a most magical and enjoyable one. I’ve been inside yurts before and always thought they seem cosy, homely and a nice place to be. This one certainly was, with a woodburner, clear panel in the roof which meant we could lay in bed and star gaze, a full kitchen set up including an oven and a very well stocked food cupboard.

Our work including a huge array of different tasks including some planting out of germinated crops, some weeding, some harvesting, some picking, some digging over beds and adding compost and some packing of the veg boxes.

We helped with the chickens – they are cleaned out every single week which was great to see, we have stayed at too many places where animals are not tended to nearly so well. There are three different varieties of hens (and several cocks) there giving a lovely array of dark brown, light brown and blue eggs. While we were there we helped mark some eggs to set under a broody hen for the beginnings of their own flock increase. It was great to be able to actually offer some helpful tips and ideas from our own chicken keeping experiences.

We helped with breadmaking and food preparation generally – at least once a week every one on site eats an evening meal together which was a festive and cheery event we came to look forward to. I baked a cake which went down very well with custard for one of the communal meals.

By far the most exciting part of the work we got involved with was the green building though – something we are really interested in and were thrilled to be able to actually get our hands dirty on. The new house almost at completion in the woods is stunning – a real dream home for those of us with a yen to live in a sustainable, local material built eco house with renewable energy, clever design features, no waste of space or resources and an eye for a simply gorgeous structure with beautiful smooth sweeping lines, pleasing colours and shapes and a truly personal design. We were helping on some repair and maintenance work on the original house which was showing some signs of having been the first crack at green building and needed some attention. This was a straw bale build, covered first with a clay render layer (using the clay dug to make the houses foundations), followed by a cob layer (clay, sand and straw) and finally a lime render layer, which should harden to a stone like texture and simply need a lime wash every year or so afterwards and last a whole lifetime or more. Some cracks and holes had appeared where the straw bales were visible so we were mixing up new clay render from clay we’d dug out and applying that. First the house needed spraying with water and the mix needed making in an old bathtub. We did this job over several days and worked with various members of the community and some visiting helpers too. It was messy, hard physical work and involved spending lots of time up very high ladders but was incredibly interesting, very rewarding and something we are very keen to do more of one day – hopefully on a house we will call our own! 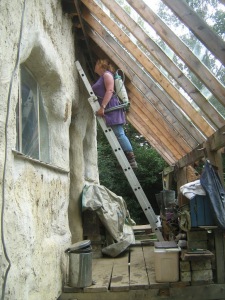 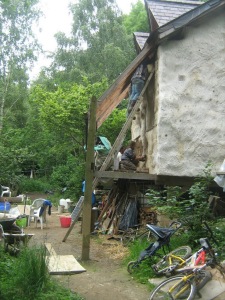 We spent our weekend off exploring nearby Durham which is a very pretty city we’d like to spend more time in at some future point, it’s certainly a very lovely part of the country. We were also very pleased to be able to invite some friends to pop in for a meal as they were passing nearby. It was fab to be able to share this amazing host with some friends and show them what we’d been up to. 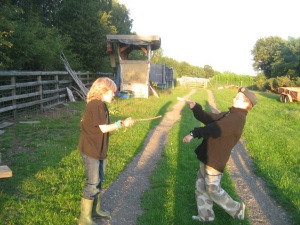 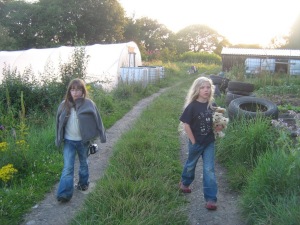 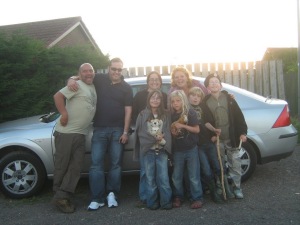 This was definitely our favourite WWOOF host so far, for all sorts of reasons; the accomodation was so comfortable, well set up and original (I’ve wanted to sleep in a yurt for ages!), the welcome and set up for WWOOFers was so well organised – we had a WWOOFers book in the yurt telling us everything we could possibly need to know, the emails exchanged with the hosts before we even arrived had been so packed with information and introductions to all the people and how they live there and everyone there was so very warm and friendly. We loved the diversity of the work, the chances to spend time with each of the people there over the course of our stay, the communal meals and the feeling we had really learnt something from our time there but also been able to give something back. For us it really summed up what WWOOFing is all about.

Dragon:
Bad: I feel I should have joined in with the work a bit more (he spent most of his days off exploring and playing with Star and the other children there. He had a ball but on his last day he spent some time chatting with one of the adults and realised how much knowledge and interesting stuff he could also have been doing alongside the playing). I would have liked to do more harvesting and building.
Good: I’ve learnt that you can live how we want to live. Not too remote and away from “reality” (I think he means conventional society, rather than slipping into a parallel universe!) and luxury and shops. It does exist!
Learnt: About metal work and sharpening stones.

Star:
Bad: The wasps! Dragon and I both got stung quite a few times by the wasps that had a nest near the rope swing we were playing on.
Good: Lots of wildlife here. We’ve seen rabbits, maybe some hares, herons, rats, dippers, fish in the river and loads of insects.
Learnt: Courgettes left to grow big become marrows. I’ve also learnt some new varieties of plants – Himylayan balsalm and butterberth.

Ady:
Bad:I struggled without a shower and running water. My issue as I knew there wouldn’t be any but it was a downside of this host for me.
Good: The honesty of everything here. The people stay totally true to their beliefs and their lifestyle. They are honest and open about what has been challenging. They are very kind people, both as individuals and as a community. They are an example to living in communities for the way they conduct themselves.
Learnt: Green building. This was a very hands on host for learning about eco building.

Nic:
Bad: I’m really struggling to find a bad other than leaving too soon really! I guess if we had been at this host long term I would have found the lack of washing facilities more challenging, particularly in winter or muddy times. Dragon and Star returned from playing every single time covered in mud and soaking wet which without access to a washing machine would become an issue.
Good: The people! I totally fell in love with the community and felt that I gained so much from spending time there. Each individual was interesting, interested and amazing to spend time with. I was inspired by them all and also felt valued myself for what I could teach them, talk about and offer. This was somewhere my heart and soul felt at home.
Learnt: So much about communal living – the challenges and issues, the highs and the lows, the strengths that each individual has to have and what can really be gained from that lifestyle. I was inspired and in awe of the set up, organisation and logistics of the veg box scheme and the permaculture principles of the lifestyle there. I loved the bit of green building we did and am very keen to learn more about all aspects of that.

When we started our WWOOFing journey I had in my head what hosts might be like, how it would work with us being both helping hands and manpower and contributing fresh ideas, new eyes and the benefits of our own experiences in exchange for hospitality, learning and new skills. For me this host embodied and captured all of those things, inspired me anew for chasing a dream and gave us so much food for thought for our own dreams and lifestyle moving forward. It was a contasting community experience to those we have stayed in before and gave us yet more ideas about how different from the norm enviornments can offer so much. 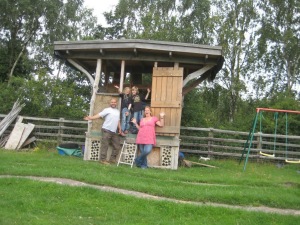 We are spending this next week with my parents in a holiday cottage in the Lake District. We have completed five months of our adventure and only have one more host left in Zone Two.